Oakland Tribune1On May 14, 1949 a private plane crashed into a hillside in Montclair, killing the two men aboard.1

The red and yellow low winged monoplane.  The plane took off for Oroville  from Hayward Municipal Airport a 8:30am.   The pilot of the plane was  John V. Edwards, 20, of  Alameda and his friend Milton A. Moltz, 20, of Hamilton Field.  They were going to visit Edwards parents.

Edwards was a corporal with the 61st Fighter Wing of California National Guard. Moltz was attached to the 83rd Fighter Squadron of the 78th Fighter Group at Hamilton Field.

Less than a half an hour into the flight the hit dense fog and were heard flying low over the hills north of Lake Temescal.  The plane then hit tall eucalyptus trees sheering of both wings.  The fuselage plummeted fully 100 yards, before crashing in the side of the hill,  just 20 yards from a house at 6989 Pinehaven Road.  The wreckage was scattered over a 50-foot area.   Both the occupants were pinned in and had to be cut out.

Witnesses to the Crash

Mr & Mrs  John Valentine and Mr & Mrs A.  Bauman Jr.  who lived in the house on Pinehaven heard the low-flying plane and the crash.    Valentine, an ex-Navy pilot remarked  "He's to Low" 2  when they heard the plane, before the crash.

The crash was also heard by the Nelson family who at 16049 Broadway, the called the police and fire department.  Mrs. Nelson said the plane sounded so low as it passed over her house that  "we ducked' 1. 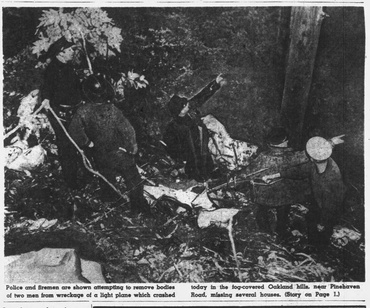