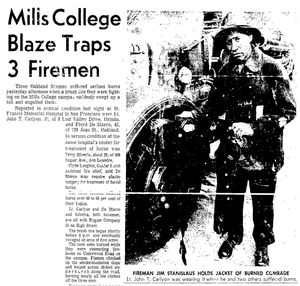 The 1968 Mills College Fire was a brush fire that resulted in the deaths of 3 Oakland firefighters. The afternoon of August 31, 1968, a brush fire on the Mills College campus swept up a hill and badly injured Lt. John Carlyon (36), Floyd "Babe" De Marco (45), and Terry Silveria (26). 1 They would later die of their injuries.

According to a firefighter at the time:

There were five men assigned to Oakland Fire Department Engine Company 31 on the day of the Mills College Fire. The crew consisted of Lieutenant John T. Carlyon, Engineer William Peaks, Hosemen James H. Stanislaus, Floyd DeMarco, and Probationary Hoseman Terry M. Silveria. They responded to the report of a grass fire from their fire station located on High Street, two blocks below MacArthur Blvd. Peaks as the Engineer was driving with Lt. Carlyon sitting opposite him in the passenger seat. The Hosemen were riding on the tailboard at the back of the fire engine. Presumably, they entered the Mills College campus at the Richards Street Gate, proceeded onto Underwood Ave. (Note: The fire was burning in the brush on the uphill side of Underwood.) Lt. Carlyon directed Peaks to continue on Underwood and then to loop around to Prospect Hill Road and back towards Richards Street to head off the fire as it progressed to the top of the hill.

At this point, two things went wrong. First, Lt. Carlyon violated a basic tenant of firefighting. That is to never place your crew between the fire and the top of the hill. The second thing to go wrong was that the fire hydrant had been painted so many times over the years that the combined efforts of Stanislaus and Peaks were not sufficient to hook up to and turn on the hydrant. The result was no water flowed through the fire hose to the crew who were waiting in the street. The flames crowned over 31’s crew and continued to burn up to the top of the hill.

Carlyon, De Marco, and Silveria were badly burned, over 50-60% of their bodies. 1 Carlyon died September 18th, and DeMarco died the next day. 2 Silveria died September 28th. 3 After their deaths, the OFD made a donation to the St. Francis Memorial Hospital where the men had been treated. 4