In 2013, Oakland saw a drop in most types of crime, especially homicides.

Here are the statistics 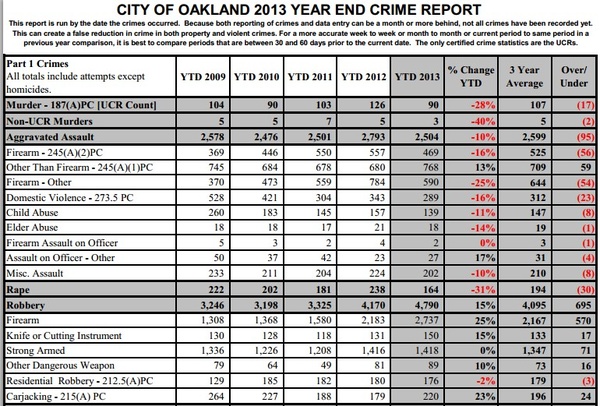 Here's a simplified version that just looks at the overall sections of part 1 violent crimes from 2012 compared to 2013:

Why did this happen?

The New Year brought a flurry of articles looking at declining homicides and crime in Oakland.  Overall crime was down for the first time in years and homicides were dramatically down, the lowest level since 2004.  The trends are continuing into the New Year.  Although the trend has been strong since last spring, except for the East Bay Express, there was little coverage.  So many people are asking me why crime is down.  This is a short answer:

USA TODAY ran a story in their weekend edition looking at homicide rates nationwide in 2013.  Among the cities they looked at, Oakland had the biggest drop. Every single life is precious, and even one homicide is one too many, but we're encouraged by these signs of progress.