building in 2014 CC SA-BY Our Oakland

The church was formed with 20 members at a meeting at Garfield School on May 26, 1889. Rev. I. D. Fleming was called to be the first pastor. The church began meeting in a tent at the present location. About 1891, 50 people from Tenth Avenue Baptist joined the church. 5

In 1951, the church moved to a new building on Foothill, and became Foothill Boulevard Baptist Church. 9,10 Nellie H. Carpenter was the organist in 1909. 3 Charles A. Wells, the pastor beginning in 1928, had worked for 12 years as a newspaper cartoonist. He developed a feature called "Art Sermons." 5

In 1949, the church broke ground on a new building at 1530 Foothill, across from San Antonio Park. 6 The church also withdrew from the Northern California Baptist convention, calling it "an association based on the dollar sign." 7 In 1949, they also took park in a 5-year missionary trip, with 18 adults and 4 small children. 8

The new building was completed in 1951, and the church moved, becoming Foothill Boulevard Baptist Church. 9,10 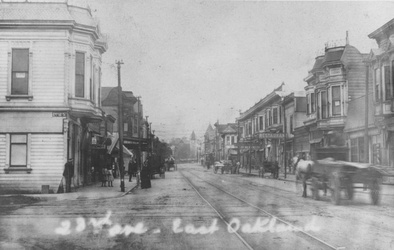