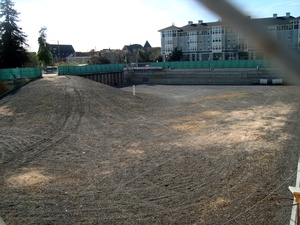 601 City Center is a big hole in the ground near the Ask.com building. It occupies an entire block.

According to SF Business Times, "Shorenstein Properties and MetLife Real Estate Investments took control of the vacant property in 2007 from Oakland's redevelopment agency with the promise it would build offices there, but has failed to attract an anchor tenant to the premium downtown sites. " Shorenstein is now trying to get approval from the city to turn the property into housing instead of offices.

As of Oct. 2015, Shorenstein is revisiting the project. According to an article in the SF Business Times: "Shorenstein needs to renew its final development plan and file for building permits before beginning construction on the project. The developer told the city it is hoping to go to the Planning Commission's design review hearings in November". But don't hold your breath - a lot can change between now and whenever construction might begin. This site has been "restarted" a number of times, but it's still just a hole in the ground.

The official site for the project is at 601citycenter.com.