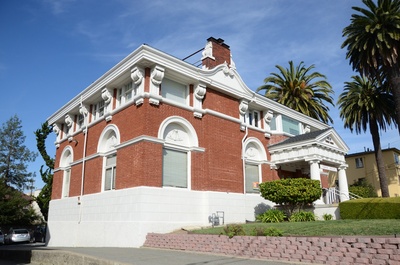 629 Oakland Avenue is a large, brick home near the top of the hill on Oakland Avenue. It is home to the Towne House Creative Living Center (CLC),

The CLC began operations in the nearby Towne House in 1969, but moved to its current location in 1992.

1927 adThe home was designed by Herbert C. Chivers and Co., Architects, for E. B. Braden [ possibly Eugene B. Braden, who later moved to S.F. ], and completed in 1911. 6 Braden was vice-president of Selby Smelting and Lead Company of San Francisco. 7 [ The Bradens had two daughters, Winifred and Louise. ]

A 1912 article about a string of robberies gives 629 Oakland Avenue as the address of one of the victims, E. B. Braden. 5 A 1922 article about a robbery 1 lists the owner as W. H. Metcalf [ possibly William Howard Metcalf, the son of Victor H. Metcalf. ]

J. Raymond Newsom offered it for sale in March, 1927. He had purchased it at auction. 2 In September, 1927, the building opened as the Red Brick Tavern, with Fanchea Newsom as owner and hostess. 3 [ The Newsoms are interred together at Mountain View Cemetery. ] The Red Brick Tavern appears to be shorted-lived; other than the opening and a few mentions in early 1928, the name doesn't appear.

Check out this groovy ad from a 1981 InfoWorld Magazine: 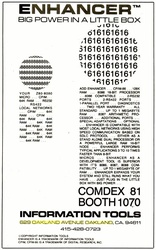 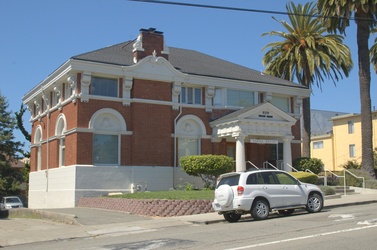 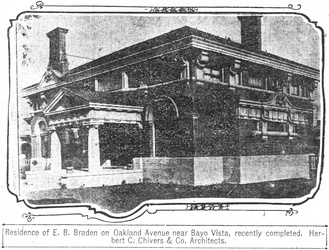 It is currently assessed at about $1.2 million. The assessment describes it as "Lodgehall and/or clubhouse".