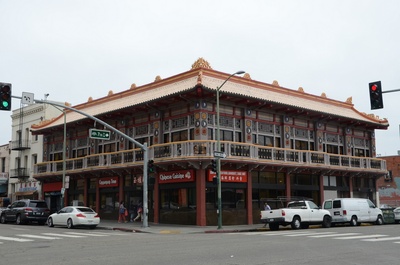 700 Franklin Street is a large "Chinese-style" building at the corner of Franklin and 7th Streets, probably best remembered as the home of the Legendary Palace restaurant.

The building was designed and built by W. K. Owen (offices 852 - 36th St.) in 1924 for the property owner, Axel Johnson (res. 362 Vernon St.) A "syndicate of Chinese capitalists from San Francisco" signed a 20-year lease for the second floor in order to open a restaurant. 1 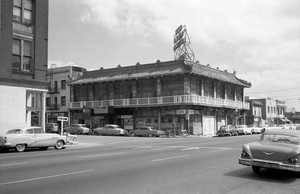 Harlem Quarter, 1962. Courtesy Chris Treadway.According to an article in the Tribune:

"The second floor will contain a large banquet room, with a 40-foot span, and a handsome dining room. Both rooms will be furnished in gum. An Oriental art glass ceiling, marble floor, etc., are unique features of the banquet room. The entire restaurant will be heated with electricity, the "Electra" type of heater being used. The restaurant entrance is to be of a fine-grad marble. A feature of the restaurant to which particular attention will be given, is the kitchen, equipped with modern ranges, ventilation system and finished in white tile. Furniture for the banquet half and dining room, mostly of teakwood, is being imported from China." 1

Owen said the structure would cost $50,000, and the restaurant fixtures another $25,000. The ground floor has eight stores, five on Franklin and three on 7th Street. 1 The art glass ceiling was done by H. Dombrink Company. The murals were painted by Tom Wong of San Francisco: 7 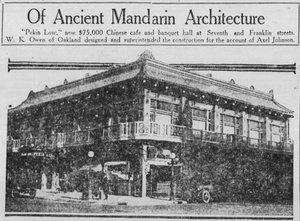