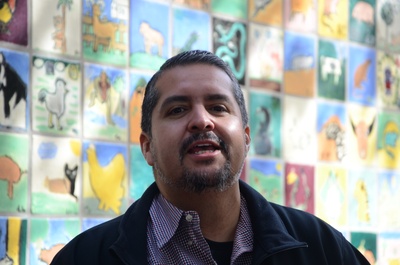 Abel Guillen is the current District 2 City Councilmember (inaugurated Jan, 2015). Prior to that, he was a Peralta Community College District trustee. Political positions here.

He has a nice newsletter (anyone know how to subscribe?)

10/24/2014 Labor Pours Big Money into D2 in Support of Abel Guillen
"Organized labor [Alameda Labor Council, AFL-CIO] is continuing to spend heavily on two City Council races, providing an overwhelming financial advantage for two candidates battling business-backed foes. Unions have spent more than $88,000 though independent committees on behalf of Abel Guillen in District2. The contracts for both unions expire next year. That is more than the $85,098 raised by his best-financed challenger Dana King. Guillen had raised $93,944 in his own campaign fund as of Oct. 18. King [has] the backing of the Oakland Metropolitan Chamber of Commerce, but the business group so far hasn't created independent expenditure funds, which are not subject to contribution caps, to aid their campaigns."

East Bay Express: Labor Spending Early for Guillen and Campbell Washington
"East Bay unions have opened their checkbooks early for two liberal Oakland City Council candidates — Abel Guillen and Annie Campbell Washington — spending more than $65,000 on ads so far for the candidates, campaign finance records show. The big spending in early October — a month before Election Day — may be an indication that labor is worried about these two council seats."

Inside Bay Area: Unions Spend Freely in Oakland Council Races
"Campaign finance reports filed this week show that the Alameda County Central Labor Council and SEIU Local 1021 have teamed up to spend more than $35,000 apiece on behalf of Annie Campbell Washington in District 4 and Abel Guillen in District 2"

The result of Labor's independent expenditure has prompted the Oakland's campaign committee to lift spending limits for all candidates in District 2 and District 4 Council races.

Fundraising: In D2, Abel Gillen raised more cash than Dana King according to reports. Abel placed first in fundraising among the 4 candidates who filed reports.

Abel Guillen Enters Oakland's District 2 Council Race
“I simply love this city. Oakland has played big role in my life, shaping my character and instilling my dedication to community service. Oakland’s challenges are many and varied, but the solutions lie in our neighborhoods, our communities, our schools and the people of our city. I want to make District 2 an example of how we can move Oakland forward, together and build together,” said Guillen in a press release.

After narrow assembly loss Abel Guillen runs for Oakland City Council, District 2. States Guillen, "I simply love this city," Guillen said in a prepared statement. "Oakland has played (a) big role in my life, shaping my character and instilling my dedication to community service."

D2 Endorsements for the 2014 election:

Colbruno pulls out to make way for Abel Guillen run