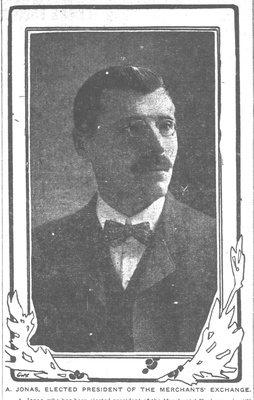 Jonas was a very busy man and heavily involved in public service in Oakland and Alameda County. He was a successful merchant, establishing the Hub Clothing Store in 1877, originally located on Broadway between 6th and 7th Streets, but later relocated to 1103 Broadway – now the site of the 1111 Broadway building. He was also an investor in real estate, and vice-president of the Bank of Germany of Oakland.

He was also a prominent civic and political leader. He was heavily involved in Oakland’s Jewish community and many other charitable, civic and fraternal activities. Jonas served on the Board of Directors of the First Hebrew Congregation of Oakland (Temple Sinai) for 35 years. During his twelve-year term as president of the congregation, he worked closely with Rabbi Friedlander and other congregation members to construct the congregation’s current sanctuary at 28th and Webster – a building which will be celebrating its centenary between October 2013 and September 2014, commemorating the 100th anniversary of the laying of the cornerstone and the completion of the building.

Jonas’ other civic contributions included terms as president of the Merchants’ Exchange of Oakland and director and later president of the Oakland Chamber of Commerce. He is acknowledged as one of the most important figures in the Merchants’ Exchange’s Inter-County Tunnel Committee, which led to the completion of the Kennedy Tunnel. He also served on Boards relating to the Oakland visit of President Taft. Jonas was a member of the Masonic Order, the Odd Fellows and the Knights of Pythias.

Numerous biographies state that Jonas lost his only bid for public office, when he ran as an unsuccessful candidate for Oakland’s councilman-at-large in 1899. His obituary in the Oakland Tribune, however, states that he served as Oakland's treasurer in 1886 and as a member of the town's trustees.

According to Davis’ Commercial Encyclopedia of the Pacific Southwest, he was best known for his work “with the annexation movement, looking toward the consolidation of county and city governments in Alameda County.” Called the “Father of Consolidation,” Jonas was among the first in the Oakland community to work toward the goal of centralizing power in local government.

Abraham died in 1923 at Mt. Zion Hospital in San Francisco, and is buried in the Jonas family plot at Home of Eternity Cemetery. 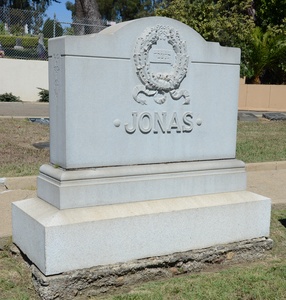 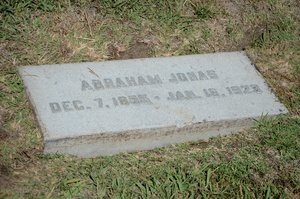