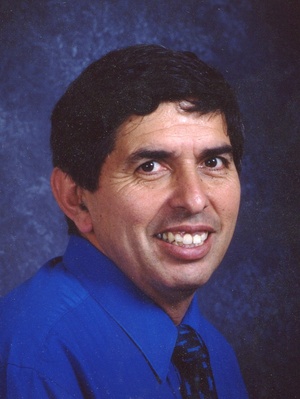 Abraham Ruelas
photo courtesy of Dr. RuelasDr. Abraham ("Abe") Antonio Ruelas (born December 25, 1952) is a local educator and author whose research and writing focuses on women in higher education and in Christian leadership. After serving for many years at Patten University as a professor and administrator, he taught 8th grade history at Epic Charter School in the 2016-17 school year. He is now a middle and high school social science teacher at Patten Academy of Christian Education. He is also actively involved in his community of the Fruitvale District.

Ruelas was born to Ignacio Ruelas and Teresa Ruelas on December 25, 1952 in Highland Hospital and was the first Alameda County "Christmas baby" that year.

Faith is a central part of Ruelas’ life. He self-identifies as a “Classic Pentecostal” as he was born into and grown up in Latino Assemblies of God churches and continues to embrace the Pentecostalism. He is an Ordained-Bishop with the Church of God (Cleveland TN), and in 2010 he was a Clergy Honoree at the Oakland Mayor’s Peace Conference in recognition of his community engagement.

He earned a B.A. degree from Patten University (1976), a second B.A. from California State University, East Bay (1980), and a Ph.D. degree in Communication Research from Stanford University (1985). While at Stanford, he was selected as a Chicano Fellow. In May 2019 he completed the Single Subject Social Science Teaching Credential Program at Alliant International University and in June 2019 received his Preliminary Teaching Credential from the State of California Commission on Teacher Credentialing.

Dr. Ruelas' writing focuses on women in higher education and in Christian leadership. He is the author of Women and the Landscape of Christian Education: Wesleyan Holiness and Pentecostal Founders (Wipf and Stock, 2010) and No Room for Doubt: The Life and Ministry of Bebe Patten (Seymour Press, 2012), and is co-author of The Role of Female Seminaries on the Road to Social Justice for Women (Wipf and Stock, 2015). Three of the women featured in his first book founded Christian institutions of higher education in Oakland: Violet Kiteley, Shiloh Bible College, Carrie Judd Montgomery, Shalom Training Center, and Bebe Patten, Oakland Bible Institute (now Patten University).

He also writes articles and presents at conferences on the role of Christian spirituality in empowering women for leadership. His presentations include the 2014 Spirituality Factor conference which was sponsored by the Mental Health and Spirituality Initiative and the Alameda County Behavioral Health Department 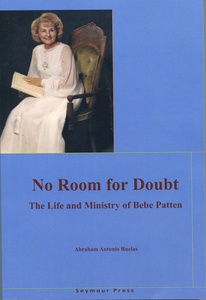 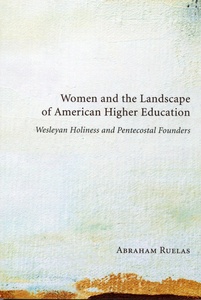 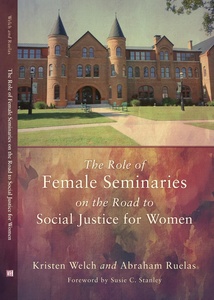 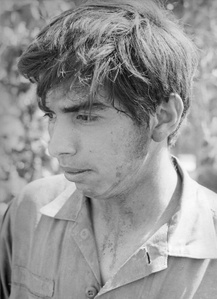 young Abe putting in some sweat equity
photo courtesy of Dr. RuelasRuelas has been a part of the Patten community since he enrolled at Patten University (then Patten Bible College) in 1970 and has been active in all three campus institutions: the university, Patten Academy of Christian Education (K-12), and Christian Cathedral church. As “sweat equity” was a crucial part of the formative phase of campus development, Ruelas gained many skills (carpentry, landscaping, concrete work, etc.) as he involved himself in the many campus facility and grounds development projects. During his undergraduate days at Patten, he volunteered in the campus in-house print shop. Upon graduation he was hired as the director of publications and guided the department from the original technology of letterpress to desktop publishing and then after a few years, prepared himself to move over to the academic side of the university.

Ruelas has served as dean of campus programs at Patten University, chair of the psychology major and a professor of communication and psychology. At the university he led the development of the initial psychology department curriculum and of the university academic senate constitution and bylaws. He is also involved in assessment of educational effectiveness and is a graduate of the 2015 WSCUC (WASC Senior Colleges and University Commission) Assessment Leadership Academy Cohort V. Additionally, Ruelas is an adjunct professor at Fuller Theological Seminary and teaches at their Menlo Park campus.

In what he calls one of his “parallel lives,” Ruelas coached at Patten Academy High School for 22 years and hung up his coach’s clipboard in the December 2012. Starting as a boys JV basketball coach, he transitioned to coaching the high school girls’ varsity sports of volleyball, basketball, and fastpitch softball. He earned the distinction of being the only coach in BACAL (Bay Area Christian Athletic League) history to coach league championship teams in three different varsity sports. In 2010 he was presented the BACAL Leadership and Service Award for having served in all the league’s leadership positions and having written the majority of the league’s governance and league play rule documents.

In the community, Ruelas has served on the City of Oakland Children and Youth Fund Planning and Oversight Committee as the City Council District 5 representative, and was on the board of directors of the Latino Commission on Alcohol and Drug Abuse of Alameda County for 20 years. He currently is a Block Captain, and chair of the Neighborhood Crime Prevention Council 21Y/21X. He and his wife Patricia host the annual National Night Out party on their block. They are also both CORE (Citizens of Oakland Responding to Emergency) instructors and are active in Council Member Noel Gallo’s “Safety Walks” and “Clean Streets” efforts.

During the 1970s, when the Fruitvale District was known as a “donut hole of Oakland” in terms of recreational space, through his involvement in the Community Redevelopment Citizens Advisory Board, Ruelas played an important role in the creation of Peralta Hacienda Park, Cesar Chavez Park (originally named Foothill Meadows Park), and Nicol Park, and the renovation of Josie de la Cruz Park (then named Sanborn Park). He was also involved in the reforestation efforts on Coolidge Avenue.