The Acorn neighborhood sits on the eastern half of West Oakland, bordered by the Brush Street / 980 Freeway on the east side, Mandela Parkway on the west (or Union Street according to the City of Oakland), Embarcadero on the south side and 10th Street on the north. By acreage it is approximately half residential, and half commercial/industrial, though the neighborhood is understood to mostly residential and concentrated on the north side of the 7th Street/880/BART. There is a shopping center at 7th and Market (Jack London Gateway), that is zoned for (and formerly had) a grocery store, though is now primarily mixed retail and fast food. Near West Oakland BART, there is some new mixed-use development of condominiums and ground-level retail, including a natural foods grocery (Mandela Foods Cooperative) and fast food. Other notable businesses in the Acorn area include the gymnastics/circus-arts Kinetic Arts Center, the industrial/fire-arts school The Crucible, the offices for People's Grocery and Linden Street Brewery. There are several low and moderate income housing projects in the the area that have been built in phases since the 1960's, though most units were built through a mix of programs, andlook like typical single-family homes or apartment complexes.

The Acorn Projects are a series of housing projects in the Acorn Redevelopment Project Area or the Acorn neighborhood of West Oakland which are primarily between 8th and 10th Streets, and Adeline and Filbert.  This complex is known as the spot where Black Panther Party leader Huey P. Newton was killed in 1989. Acorn, or "The Corns" as local residents call them, consists of a wide variety of public housing projects located between 10th and 8th streets, and Filbert and Adeline. There are three high rise buildings that resemble the high rises of Chicago and New York City, and also there are many spread out projects. Acorn is home to the Acorn street gang. 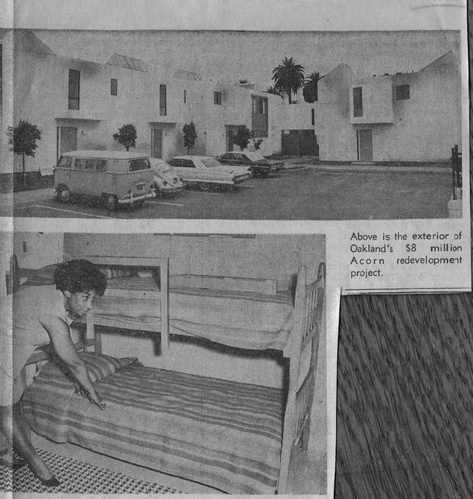 Source: San Francisco Examiner 9/16/68 “Oakland’s Redevelopment Project Ready for Public” (available at Oakland History Room)Acorn was the first major project of the Oakland Redevelopment Agency. For three years the nonprofit OCCUR heavily lobbied for the project as part of a plan to redevelop most of West Oakland. In 1957, City Council approved the plan.  Construction began in 1962 with a heavy emphasis on demolishing (vs renovating) existing structures. Almost every structure that had been in the area previously was demolished. A church, mortuary, and one home were the only structures that were not demolished. Estimates indicate that 41% (approx. 333 buildings) could have been rehabilitated.  [Hausler, 1987, 135-6]

The effects of the project on the local community were disastrous. Approximately 9,000 residents had to relocate. This created significant instability as the project wasn't completed until 1974 and only created 1,000 new units. The loss of community was substantial and efforts to integrate it were unsuccessful, resulting in an almost entirely black housing project. [Hausler, 1987, 136-7]

According to the article “Oakland’s Redevelopment Project Ready for Public” (San Francisco Examiner 9/16/68,  available at Oakland History Room), the $8mn project "is sponsored, owned and managed by the Alameda County Building Trades Council.” “Acorn is a non-profit, privately operated community offering city living at rentals ranging from $67 a month for studio apartments to $145 for 4-bedroom units. To qualify for the  latter a family of seven or eight may earn up to $11,250 a year. To qualify for the studio unit, with combined living and bedroom, an income up to $6050 is allowed.” The article called it “very presentable as community housing projects go" and indicated that 4300 residents displaced by the project have first priority for spots. The article articulated worries that rent would be too high for the income of the displaced group. 10% of the new housing was set aside for previous residents, regardless of ability to pay.