S. Marie Griffin was graduated from the Technical High School with the following honors: Selected to play solo part for first violin, with a string ensemble from the school orchestra. She was for four years member of the piano club of the school and also the orchestra. Other colored graduates from this school were Richard and Althea Clark, sister and brother, and Bernard Bacqui, who was the honor pupil of the school. He won his honors in mathematics and trigonometry in the shop. His name was given special mention by the principal on commencement night. Owing to the fact he was seriously hurt just before he commencement, he was not present.

At Clawson Junior High school, Homer Gee Bishop, who is just 15 years old, graduated with the following honors: Gold "C" honor pupil, having a record of all "ones," in all his studies for four terms. He was editor of the school magazine, "Clawson Clippings''; secretary of the school student association and halfback on the school football team. The other colored members of the class were: Henly Jones, who won the silver medal, and Maxine Blackburn, pianist for the school orchestra.

Marie Griffin is the daughter of Mr. and Mrs. Thomas Griffin, who came to Oakland from Baltimore, Md., when Marie was 1 year old, and her brother William, also a graduate from Technical High, was 1 years old. Her father was order clerk for a number of years at a grocery in Oakland, and is now receiving clerk of an Oakland store, Her mother was the first colored student to enter and graduate from De Paw University of Greencastle, Ind.

Homer Gee Bishop is the son of Mr. and Mrs. James Bishop. He is a native son. His father is from a pioneer California family. His mother is a native and graduate of Wilberforce University in Ohio, and taught for a number of years in Western University at Quindaro, Kan.

Rabbi Rudolph Coffee delivered an appreciative address Sunday evening at First A. M. E. church on "The Value of Education." He spoke under the auspices of the University and Scholarship club.

A public reception was given all the graduates Monday evening at Beth Eden Baptist church, Oakland, and on Wednesday evening Mr. and Mrs. Griffin entertained for their daughter Marie and the other graduates in the parlors of the Community House.

Arthur Brooks, valet to President Coolidge, who was recently spoken of through the Associated Press, was with the late President Harding while on his western trip. He has been for the past 30 years a friend of Dr. Purnell of Oakland.

During the past week the annual farmers conference was held at Tuskegee Institute, Alabama. These conferences are usually attended by not only farmers, but by both colored and white educators and welfare workers. This year the following subjects were discussed: "Agricultural Unrest," "The Causes and the Remedies," "Good Health a National Asset."

Oscar de Priest, a member of the city council of Chicago, was recently given a banquet by the colored policemen's band. It was through his efforts that the chief of police of that city permitted these colored police officers who were organized into a band to have time from their duties for band rehearsals. This privilege was given to the white police band, but withheld for years from the colored.

News has just reached the coast of the death of Chaplain Theophilus G. Stewart (retired), which recently occurred at the residence of Bishop Lee in Wilberforce, Ohio. He was 80 years old and one of the leading ministers in the A. M. E. church. He was vice-president of Wilberforce University for ten years, when he resigned and accepted a chair in Payne Theological Seminary, where he taught up to the time of his death.

The members of First A. M. E. church will give a benefit concert for Miss Lavern Porter, Thursday evening. She will leave for the east to complete her study of music. 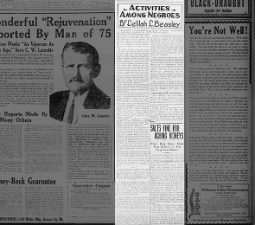