Too much praise cannot be given to the committee of local colored letter carriers who were responsible for the presence of the large delegation of their group at the recent national convention of Letter Carriers held in this city. ["This city" = Pittsburgh, PA. Part two of the newspaper story here. - MF] This committee, headed by Edward Ritchie, president of the bay cities branch of the National Alliance of Postal Employees; William Grunday, chairman of housing and program committee; T. M. Jackson, Edward White, Royden C. Hall, R. E. L. Hutton, formerly of New Orleans, and Edward S. Snellings, who is a native of Memphis, Tenn., where he was engaged in the printing business. After coming here, he took civil service examination and won an appointment as mail clerk, resigning to accept a position in special delivery section of the postal service. Members of the Memphis band are personal friends of Snellings'.

The Bay Cities branch of National Alliance of Postal Employees is only three years old whereas the national body was founded in 1913. The Bay Cities branch nevertheless sent a delegate to the recent sixth biennial convention held in Pittsburgh, Penn., July 14-18. The delegate was William Grunday, secretary to the branch, and R. E. L. Hutton, national treasurer, accompanied him. Hutton is a retired railway mail postal clerk, formerly from New Orleans, La,

One of the outstanding features of this convention was the Stephen Foster "Air-Mail Flower Show." Oakland won the prize for the longest distance flowers sent to the show, and the best exhibit was also won by Oakland. The best independent flower show was won by Los Angeles branch, who sent orchids. Grunday, their delegate, is from Denver and has been in the United States mall service thirteen years. His son, five years old, dressed as a mall carrier, led the sixth division in the parade Monday morning. He was followed by the Memphis band and delegations from the following states: Illinois, Iowa, West Virginia, Michigan, Missoura, Minnesota. Daily accounts of the activities of both groups in the convention have been accurately covered in The TRIBUNE. The Memphis band received considerable attention from all groups of people,

There were many who came from nearby cities to attend the convention. Among this number was Mr. and Mrs. Posey of Vallejo, who for the past twenty-four years has been employed in the ship building industry in Mare Island navy yard and is a Spanish-American war veteran.

The local branch of the Universal Negro Improvement association held a celebration and rededication program at both mornIng and afternoon services in their hall (the new Liberty) in West Oakland. A program was rendered in the afternoon when notes were read from the Negro World, official publication of the national body, founded by Marcus Garvey. It spoke of the aims of the organization, and told something of Mr. Garvey's lectures in America. An Interesting article by Dr. Carter G. Woodson, on the "Unification of all Negro Churches" was exceptionally fine. Woodson is the editor of the "Journal of Negro History." Musical numbers featured the program, with Mrs. Sadie Phipps, singing in a most impressive manner.

The National Association for the Advancement of Colored People held their annual picnic Monday (Labor day) in Wonderland park. It was largely attended. The newly appointed Linden branch Y. W. C. A. Girl Reserve secretary has arrived. She is Miss Armand Jones, a native of Tallahassee, Florida, graduate of Payne college, Atlanta School for Social Work and a recent student at New York summer school for Social Work in New York City. She was for three years connected with Girl Reserve work in St. Joseph, Mo.

The Alameda County League of Colored Women Voters will hold a membership dinner Thursday from noon until 8 o'clock in Linden branch Y. W. C. A. The six o'clock hour will feature a program during dinner when Mrs. Katherine Franklin, of the Amity Inter-Racial movement, will address the assembly on "The League of Women and Their Influence in World Affairs." The public will be welcome. A chicken dinner will be served for 50 cents. The league at the regular meeting this week was held Thursday instead of Wednesday. The following standing committees were appointed by the president, Mrs. Bertha Allen: Efficiency in government, Mrs. Hettie B. Tilghman; corresponding secretary, Mrs. Lena Wysinger; Mrs. Lillian Dixon, chairman of programs; municipal affairs, Mrs. Chlorade Sledge; membership, Delilah L. Beasley.

The fall program of the Linden branch Y. W. C. A. was given to the public this week, and was from the health and education department with Mrs. Ethel Lewis, chairman. Beginning Tuesday, September 15 the registering of those wishing to attend the dressmaking classes under the direction of Mrs. Eva Smith Jones will start. The membership committee invites friends Tuesday evening, September 22 to hear Mrs. Ethel Riley Clark, executive secretary of the Booker T. Washington Community Center of San Francisco in an inspirational address at the membership inspirational evening at 8:30 p. m. Skits by the club of girls and music by some of Oakland's best talent will be presented. Mrs. Grayce-Mathews is chairman of of the membership committee.

Mr. and Mrs. Julian Wilder of Berkeley have had as their guest during the week, Mrs. Grace Wilson of Denver, who was called here on account of the death of Mrs. Mollie HIII, a relative.

Sympathy is extended also to Mrs. Esther Jones Lee, who lost her husband through a long illness, this week. This is the third member of her family to pass away in less than two years, her father, a retired minister, her mother, and her husband.

The colored citizens held a mass meeting Thursday night in First A. M. E. church. The principal speaker was John W. Fowler of Los Angeles, president of the California United Progressive league. Fowler said "that there are hundreds of colored people out of work in California, and that the time had come for colored people themselves to do their part in creating jobs and giving relief to those out of work." A local branch of the league was organized with the following officers: President, J. M. Bridge; vice-president, Felix Beckford; secretary, Mrs. Lillian Borman; chairman advisory board, L. M. Hudson.

The advisory board of nine members will cooperate with the Red Cross and all other welfare organisations. A free employment bureau will be established at 720 Market street, where those seeking work might register, 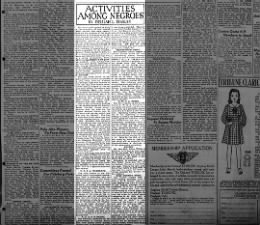