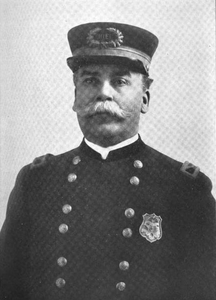 from Past and Present of Alameda County 1914Adelbert Wilson (January 8, 1844 – March 25, 1915) was a 40-year veteran of the Oakland Police Department, and Chief of Police from December 20, 1905 until his retirement in 1912. He refused the position of chief several times until civil service reform was enacted and he felt he couldn't be dismissed out of hand. He had been chief for only a few months when the 1906 Earthquake struck, and had to deal with the huge crowds of refugees that came to Oakland following the quake.

Adelbert was born January 8, 1844 in Maine. He came to California in 1863 to seek his fortune, and married Mary E. Poole (Wilson) in 1872. They had three children, Lottie Almire Wilson, Florence S. Wilson (Walker), and Spencer Edward Wilson. All three children died young. 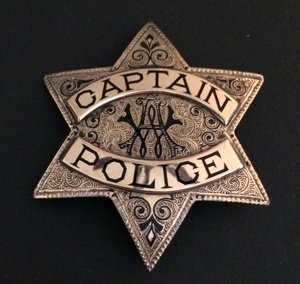 captain's badge
photo courtesy of Jim Casey, policeguide.comAfter coming to California, Wilson worked at a number of jobs to make a living, including as a blacksmith. On May 30, 1870, he was appointed a special policeman of the Oakland Police Department. Four years later he was appointed to the regular force, and made sergeant in 1877.

Wilson's distaste for politics and cronyism is easy to understand. "During the political excitement known as the "Kearney Workingmen's Movement," Sergeant Wilson and eighteen other officers were discharged. He was reinstated, only to be again dropped from the force and again taken on many times, according to what political leaders were in power." 1 For example, "...on January 17, 1881, he was reappointed and on June 6th was removed again." 1 After several years of this there was a bit more stability, and on May 7, 1889, he was made captain.

Wilson refused the position of chief several times because of his past experience with politics. Finally, when until civil service reform was enacted and he felt he couldn't be dismissed out of hand, he accepted the appointment, and became Chief of Police on December 20, 1905.

Adelbert had been chief for only a few months when the San Francisco earthquake struck on April 18, 1906. His force of 71 police officers had to deal with nearly 200,000 refugees arriving in the days after the earthquake.

On April 6, 1910, Wilson was promoted to the new position of superintendent of the police. 2

Poor health forced Wilson to take a leave of absence, and in 1912 he retired from the force. He was succeeded by Walter J. Petersen.