Adrien Georges Chauché (1834–April 22, 1893) was a wealthy wine merchant, vintner and the business partner of Charles Bon. Together they owned the Mont-Rouge Vineyard & Winery in Livermore. NB: In some records, Adrien is spelled Adrian or Adrienne, and Chauché is often without the accent.

Adrien Chauché was born in Bordeaux, France in 1834. He became a naturalized U.S. citizen in 1857. Adrien married Paris-born Adele (Chauché) (b.1827 or 1834–March 6, 1892) but they had no children. The Chauchés lived at the northwest corner of 7th and Alice at 855 Alice Street in Oakland, and Adrien had a wine and liquor business in San Francisco.

Following Adele's death in 1892, Adrien became engaged to Bon's sister Marie Elizabeth Bon (Chauché) (September 6, 1866–October 8, 1942). Although they were well-known to each other, Marie declined when Adrien first proposed. It was perhaps in part because of the 32 year difference in their ages, but to remove another possible impediment, Adrien left the French lodge of Masons.

The Mont-Rouge vineyards were started in 1884. 5,6 One of the wines won a gold medal at an exhibition in Paris in 1890, 4 so it would seem the competition between California wines and French wines has been going on for quite some time. See pictures of the vineyard here. As with most wineries, it had to stop producing during Prohibition (1920–1933). The winery was destroyed by fire in 1938 (or 1931?).

In 1893, Chauché fell deathly ill. He and Marie were married on April 21 with Chauché in his deathbed, and he died a few hours later.

Adrien's total estate was valued at approximately $100,000. His will (dated the same day he died) left $10,000 to a niece in Bordeaux, and of the rest, 1/2 to Marie, and 1/2 to any children he might have with Marie, otherwise to Marie. However, the will also stipulated that if Marie died the same day he did, his 1/2 the business was to go to Charles Bon, and the remainder of his estate (including personal property) was to go to his godchild, Adele Maria Chaix of Napa. 1

Adrien's funeral was held at the Church of the Immaculate Conception, and the Chauché and Bon families are interred in a vault in Saint Mary's Cemetery, built over the remains of Adrien's first wife Adele. 2 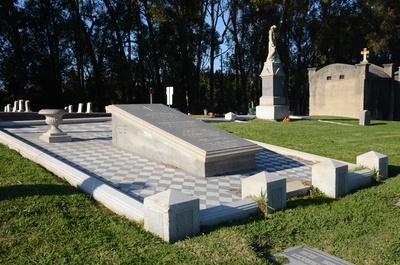