The African American Museum and Library at Oakland (AAMLO) (aka Charles S. Greene Library) is both a museum and library dedicated to the preservation and sharing of the history, art, and culture of African Americans in Oakland, the Bay Area, and Northern California. It is located at 659 14th Street in a historic Carnegie building built in 1902. This building was the second home of the Oakland Public Library. AAMLO is open from 12:00PM-5:30PM every day except Sundays and Mondays.

On April 14, 1981 the Charles S. Greene Library was designated Oakland Landmark #48, under Zoning Case #LM81-12, and is also listed on the National Register of Historic Places.

In 1946, Eugene and Ruth Lasartemay and Jesse and Dr. Marcella Ford began collecting the oral histories and artifacts that documented the activities of African Americans in and around Oakland, the Bay Area and California. They formed the East Bay Negro Historical Society in 1965. After combining with other collections and various moves, the collection ultimately became the AAMLO in 1994. According to AAMLO's official site, "in 1994, the City of Oakland and the NCCAAHL merged to create the African American Museum & Library at Oakland (AAMLO). This unique public/private partnership entered a historic juncture with the opening of AAMLO in February 2002." The Museum building originally housed the main Oakland Public Library until 1952. It was then home to a number of nonprofits until it was closed in 1989 due to structural damage suffered during the Loma Prieta earthquake. After an $11.2mn retrofit, it was reopened as the AAMLO in 2002.

AAMLO's museum is housed on the second floor of the building. It has both original exhibits and also has a number of traveling exhibits. There is a remarkable mural on the walls of the stairway to the second floor.

The museum's archive includes over 160 collections. The archives include an oral history collection, microfilm collection, photographs, original diaries, and other primary materials,. 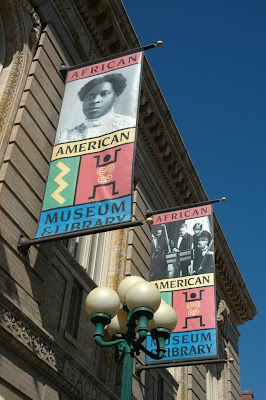 banners at AAMLO
photo from Our Oakland 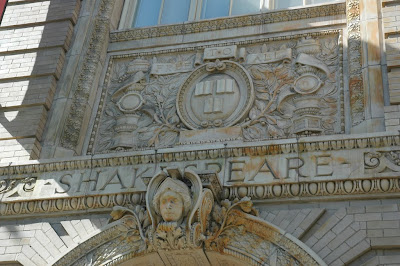 detail of AAMLO building
photo from Our Oakland 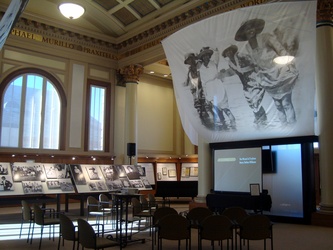 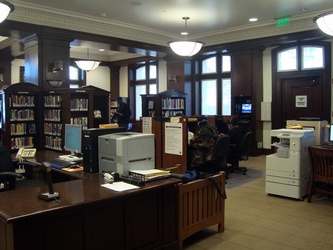 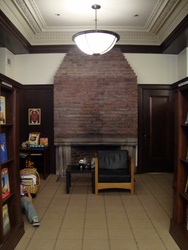 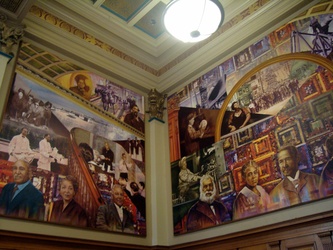 Mural over the main staircase at AAMLO. On the right, you can see the staircase itself portrayed within the mural. (Feb. 2013)