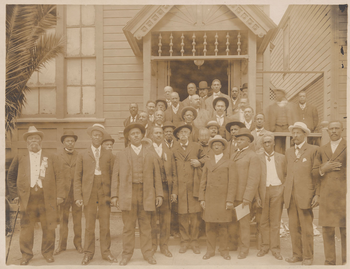 The Afro-American Council was a national civil rights organization founded in 1898 in Rochester. Although the national organization dissolved in 1907, the California and Alameda County councils appear to have continued for a few years after that. The AAC was a training ground for many of the famous civil rights leaders, including Ida B. Wells and others who went on to found the NAACP in 1909. 1,2

The first mention of the Alameda County council is in 1903, following a meeting at their hall at 876 Broadway (740 Broadway after renumbering). 6

The latest reference is in 1914, and mention councils in Sacramento, Stockton, and Oakland. 7