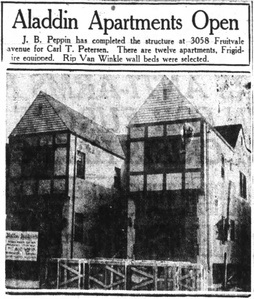 The Aladdin Apartments were in a building at 3058 Fruitvale Avenue near School Street, constructed in 1928.

There was apparently an earlier building known as Aladdin Apartments c.1909 that was at 1st Ave. and E12th Street. 2

The location is now a gas station. It's unclear when the apartment building was demolished, but the address is still apartments in the 1969 streets directory. 3