Alben Randolph Froberg (May 9, 1890 – October 8, 1968) was an Oakland-based architect. He designed a number of familiar buildings around Oakland, include the former Connell GMC Pontiac Cadillac building on Broadway, and what was IB's Hoagies at 1601 San Pablo. 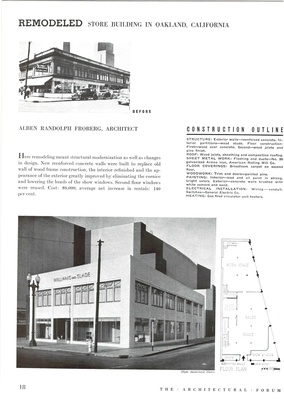 Williams and Slade Building, Architectural Forum, July 1937 4 (fair use)Froberg studied at UC Berkeley under John Galen Howard. 3 He graduated in 1913 with a Civil Engineering degree (then in the Natural Sciences) 2 and obtained his architect's license in 1915 1. The 1920 directory lists him working as a draftsman in San Francisco for Frederick Whitton. His first known design in Oakland was the Laher Auto Spring Company Factory, built in 1925. A 1927 directory lists his business address as 1924 Broadway in Oakland. 1933 and 1939 directories list his office at 1955 Webster. In the 1940s and 50s, he had an office at 3454 Harlan Street.

It appears he mostly worked alone, but the 1938 directory lists him working with H. J. Christensen, one of the builders of the Connell GMC Pontiac Cadillac building.

Froberg's works in Oakland include:

Froberg also designed buildings in Berkeley, and a number of industrial structures for shipyards in Alameda.

Alben Froberg died on October 8, 1968, at the age of 78. His remains were interred at Mountain View Cemetery in Plot 45, near his mother, father, and sister. [Gene says:  I couldn't find a marker for Hannah or John (brother); NAParish responds: This list says Sadie and Hannah (listed as "Mother") share a marker.] Concha is apparently buried in Holy Cross Cemetery in Colma with her parents, although funeral services were held at Oakland's Grant Miller Mortuaries, the same funeral home where services were held for Alben just three months earlier. His brother, John O. Froberg, is buried at Colma's Cypress Lawn Memorial Cemetery. 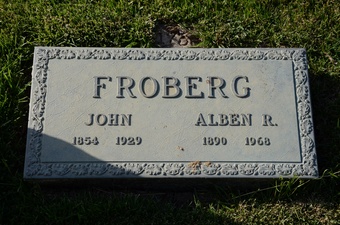 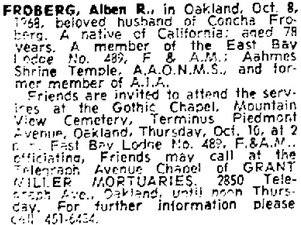