Albert Gabriel (A.G.) Gurnett (January 19, 1844 – February 15, 1903) was an early resident of Oakland, and the younger brother of W.J. Gurnett. He worked with his brother at Irwin, Gurnett and Company, which became Gurnett Brothers when W.H. Irwin retired in 1873. 1 A.G. then became a stock broker, specializing in mining stocks. 2,3 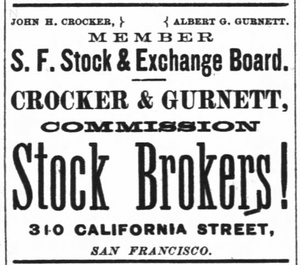 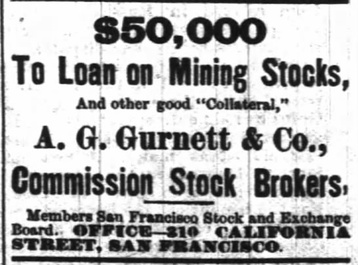 Gurnett was born in Ontario, Canada, on January 19, 1844. It's unknown when he came to California, but one record says he became a naturalized citizen in 1867 in San Francisco. He married Mary Mason Buffington (Grimes) (Gurnett) in May 1874 in San Francisco. 4 Mary was the widow of Nathan Everett Grimes, who died in 1872. They had three children, Everett Mason Grimes, Mary Alice Grimes, and Thaddeus Eddy Grimes. A.G. and Mary had a son, Albert Gabriel Gurnett, Jr. born in 1881. Sadly, Mary died giving birth to their second child in 1882, 5 and Albert Jr. died suddenly in 1900 at the family ranch near Walnut Creek. 7

A.G. remarried in 1890 to Cordelia E. McDonald (Gurnett) of Marysville. 6 They had one child, Lloyd Adams Gurnett born in 1894.