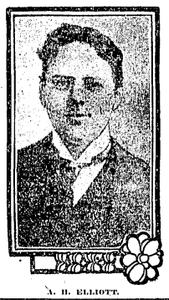 Elliot served in the Navy during the Spanish-American War in 1898. 7

Albert Elliot was a lawyer and a Republican, and he was a little bit obsessed with annexation and consolidation. The idea was to have a centralized government. (See this book by the City and County Government Association of which Elliot was a member.) Elliot was president of the Greater San Francisco Executive committee (he practiced law in that city) and in 1907, while on City Council, he spoke at the annual meeting of the San Francisco Merchant's Association in favor of consolidation. The group wanted all Bay Area cities to consolidate into a "greater San Francisco." Elliot gave a speech complaining about the state of Oakland's government. He called the government "old-fashioned and hopelessly expensive and inadequate."

"In Oakland today taxes are abnormally high in proportion to the benefits received by the people... A municipality is a giant business corporation for doing effeciently the public business of its people, such as the care of streets and sewers, the public health and the public education. If this be true, then I see no reason why organization and consolidation, the secrets of success of modern business enterprises, should not be the economic principles to apply when considering the affairs of contiguous cities, having people with common pursuits, common interests and a common material destiny.

I know of no lamp to guide our feet in the matter except the lamp of experience. We are proposing no new experiment. Our friends across the Atlantic point with justifiable pride to London as the greatest city of the continent, if not the world. London grew into giant manhood by the process of consolidation and covers more square miles of ground by five times than will the greater San Francisco. Our own American city of New York! Do we not feel a thrill of pride in this municipality that grew to be the second amongst a modern race of giants through the process of consolidation? New York has two and one-half times the area of our proposed Pacific city. Chicago, the pride of the Middle West- the modern Rome, to which all roads lead- consolidation made her great amongst cities and gave her an area exceeding that of the Greater San Francisco. Pittsburg, the city of wealth and industry- her growth hastened by consolidation; and Cincinnati, hurrying to accept the lesson learned from experience. All those cities, known to every schoolboy, have adopted the dictates of a wise business policy.

Each day there stand upon the decks of the boats that cross the bay thousands of men who look about the City of the Oaks and the City upon the Seven Hills, and they say in their hearts, 'I love them both. I am a part of them both: I want to live in them both and vote in them. I want to live in the bourough [sic] of San Rafael, or the bourough of the Western Addition, or the bourough of Oakland, as a citizen of the Greater San Francisco, the fourth city of our country." 8

Elliot was involved in the annexation of Temescal, Elmhurst, Fruitvale and Melrose and REALLY wanted the annexation of Alameda. 9 In 1912, no longer on City Council but now a member of Oakland's Chamber of Commerce, he was still making the rounds in favor of consolidation. He spoke to a group about annexing San Mateo county to San Francisco. 4 He was still stumping for greater San Francisco to the Commonwealth Club using many of the above arguments.10 It is appears that by 1912 consolidation was even more of a pipe dream than ever as it had already been voted down by the (state?) Senate in 1911.14

Elliot was on the committee to write a new charter for the City. On another note, Elliot opposed municipal ownership of the water supply. 11

Elliot's name comes up frequently in reference to women's suffrage; he seems to have been an early advocate. 1 Adelina was the only woman to drive a car in a fleet parade in Oakland in 1908, 2 and in 1907 the two made the news for taking a road trip: Mrs. Eliot drove the car for a good portion of the trip. 3

Elliot also represented a Mexican man, Guillermo Kota and a Japanese man, Heikichi Teru. At the time, California had an "alien poll tax" which Elliot alleged was unconstitutional and a violation of the 14th amendment and the 1870 equal civil statute. Elliot said that the law protected all people in the United States. Japanese people (men) at the time had special dispensation because of a 1911 treaty with Japan, but Elliot argued that everyone, including Kota, should be treated equally. Attorney General Webb stated that the President of the US had no right to deny states to discriminate against residents of those states, taking state's rights to an interesting end. 12 All immigrants had to register, or could be arrested. Elliot planned to test this by having someone (presumably Teru) refuse to register and be arrested. 13

Albert died in 1940, and was cremated at Mountain View Cemetery. He is buried in Plot 1 with Adelina, Alice and Albert, Jr. 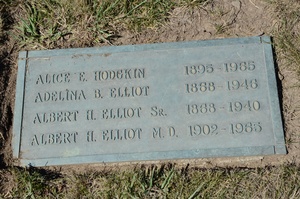