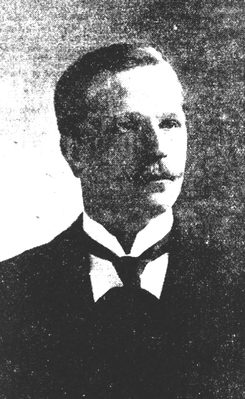 Albert L. Black
photo from SF CallAlbert Lloyd Black (May, 1871–March 27, 1904) was a promising young lawyer who was working for the law firm of John R. Glascock when he died of typhoid pneumonia.

Albert was born in May, 1871, in Sonoma County, to Henry Clay Black and Adrienne "Addie" Rector (Black). He was very studious, and passed the state bar even before he was of age.

Albert was sick with typhoid pneumonia for several weeks. His doctors thought he was recovering, but he suffered a pulmonary hemorrhage and died. The Masons took charge of his funeral, and Albert was interred in Mountain View Cemetery.

After Albert's death, in 1910 May worked as a house mother for the Lila Cottage in the Mary Smith Home for Friendless Girls. Dorothy, then age 10, lived with her, along with 7 girls.