Alfred Andrew Cohen (July 17, 1829–November 16, 1887) established the San Francisco & Oakland Railroad, and served as its President. This was the first railroad system in Alameda County in 1863. More significantly, he was the chief attorney for the Central Pacific Railroad, i.e., the attorney for "The Big Four".

In a related note, 19th century gifts were quite impressive ... below is a beautiful sterling silver speaking trumpet which A.A. Cohen gave as a gift "From A.A. Cohen, President of the S.F. & Oakland R.R. Co., TO W.E. Bushnell, Master of the Co's Steamer, El Capitan" 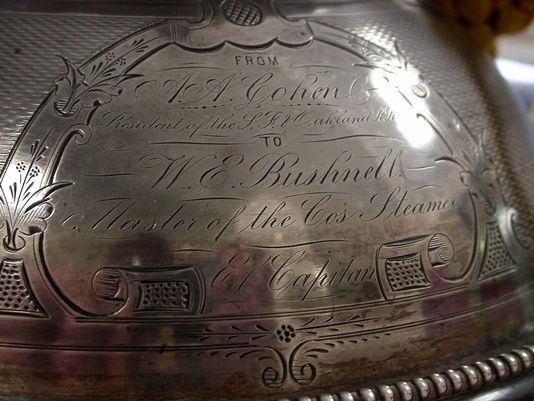 Alfred Andrew Cohen was born in 1829 in London, England, to Andrew Cohen and Hannah (Oppenheim) Cohen, part of a wealthy merchant family. According to The Story of Fernside, when King William IV of England freed all slaves in his kingdom in 1833, this was bad news for the Cohen family since one of their major holdings was a coffee plantation in Jamaica. The family moved out of London to Exeter in Devonshire. 3 After schooling, Alfred returned to London to work for a solicitor.

Alfred immigrated to Canada in 1845, then to the West Indies to work with his brother. The 1849 Gold Rush grabbed his attention and he moved west to Sacramento. By 1852, he'd come to San Francisco, and was quite successful. On July 17, 1854, he married Emma Grace Poole Gibbons (June 12, 1834–October 6, 1924), the daughter of well-to-do San Francisco physician Henry Donaldson Gibbons and Martha Sharples Poole Gibbons. After a banking scandal in 1855 and some time in jail to study up on the law, Alfred passed the bar in 1857. By 1859, he'd moved his family to Alameda, purchasing a property that later became the Fernside neighborhood.

Alfred and Emma had 7 children, the best known of which was Alfred H. Cohen, the young Oakland attorney who married Emma Bray and lived in the Cohen-Bray House.

Although the 1860 census lists his occupation as "horticulturist", farming was clearly not his future. He formed the San Francisco & Alameda Railroad in 1863, and it began service in 1864. In 1865, he acquired and merged in the San Francisco & Oakland Railroad. Soon the trains were running from Alameda to Hayward, and the ferry to San Francisco was running 5 times a day. 3 By 1869, the Central Pacific Railroad (CPRR, of "Big Four" and transcontinental railroad fame) had acquired the railroads, and Cohen was now a very wealthy railroad attorney for the CPRR. 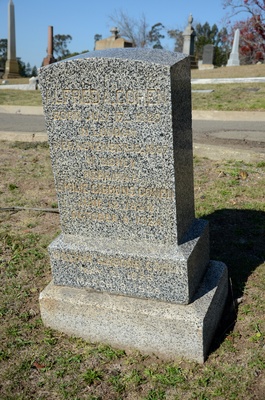 Cohen family marker
photo CC SA-BY from Our OaklandCohen died in 1887 aboard a train in Nebraska while returning from a trip back East. He had written his wife Emma that he was ill, and she met up with him in Chicago. Son William and his wife were also aboard the train when he died. 2 His remains were returned to the Bay Area, and Alfred was buried in the family lot at Mountain View Cemetery. Son William Gibbons Cohen (May 29, 1855–March 9, 1928) is buried there. Son Edgar Andrew Cohen (September 23, 1859–April 7, 1939) who was a well-known photographer, and his son, Alfred Booth Cohen (August 13, 1887–November 2, 1953) and daughter Beatrice A. Booth (October 7, 1891–November 12, 1904) are also buried there.