Dietz was born in New York in 1832.  He married Sarah J. Dietz (c.1844-?) of Massachusetts, and they had three children: Mary Alice Dietz (?-?, later Boyer), Charles Longworth Dietz (August 1869-?), and Nellie P. Dietz (October 1875-?). The Dietz family lived on San Pablo Avenue near the Oakland Trotting Park. Early listings describe it as "west side of San Pablo Avenue near Temescal Creek", but later directories list it as 5403 San Pablo Avenue.

Dietz was also the owner of A. C. Dietz & Co., an importer and wholesale dealer of paints, oils, glass, varnishes and lamps at 224 Front Street in San Francisco.

A.C. apparently loved horses. Besides living near the racetrack, he employed a groomer at the family home and had at least one racehorse. In his later years, he purchased a ranch in Ventura County for breeding horses, and spent much of his time there. He died at the ranch, and left an estate of approximately $270,000, most of which went to Sarah. 1, 2

Dietz's home at 5403 San Pablo passed to his daughter (Mary) Alice Dietz Boyer and her husband Robert J. Boyer. Boyer was a tobacco merchant, briefly an Oakland City Council member in 1901, and supposedly a friend of former Governor George C. Pardee. The home had been built in 1865, and was later described by the Berkeley Daily Gazette as "Oakland's first mansion," though this is almost certainly an exaggeration.3 The 14-room house was surrounded by 6 acres of grounds, which had an impressive collection of statues and well-maintained gardens. Boyer survived Alice Dietz (and the other children of A. C. Dietz) by several years, and he lived out his days in the mansion with his full-time housekeeper, cook, and gardener. After his death in 1943, the Dietz mansion on San Pablo was demolished in short order, and new streets were cut through the property: 54th Street west of San Pablo, which ends in cul-de-sac, and Boyer Street, connecting the new 54th to 53rd. A number of identical two-story apartment buildings were built in 1944 along the new 54th Street; almost all of them stand today. On the San Pablo Avenue frontage of the former estate, larger lots were left. They now house the Chaparral Motel and Giant Burger. The front door of the mansion, were it still standing, would be at approximately the northwest corner of the Giant Burger parking lot.4 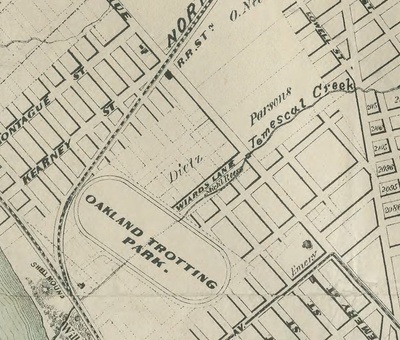 Andrew E. Dietz was the manager of the Dietz Opera House in 1887 ... perhaps Andrew was either Alfred's son or brother?  Perhaps father? Possibly brother. Too young for father. He started as a janitor.

Also, Fred Dietz, a clerk in San Francisco, lived at the Dietz Opera House. Clearly, another relative. Connected with Andrew, so probably nephew.

Frank X. Dietz was a watchmaker in Oakland, who lived at 1408 Ninth Street. Probably one more relation to Alfred.

Mary A. Dietz and Emma Dietz were granted a patent for a closing dustpan in 1881.