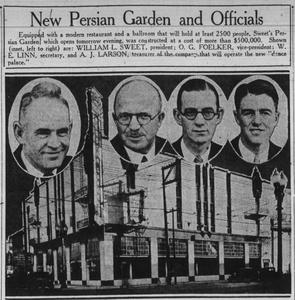 The Ali Baba was a much-loved dance hall formerly located at 111 Grand Avenue at Webster. It first opened in 1930 as Sweet's Persian Gardens, a luxurious restaurant and ballroom.

The building was designed by architect Ray S. Keefer and opened to the public on Friday, December 19th, 1930 with a ribbon-cutting ceremony led by E. B. Field, president of the Oakland Chamber of Commerce. It was regarded as "(a) beautiful and justly termed 'dance palace'... second to none on the entire Pacific Coast. (Oakland Tribune, December 18, 1930) Music was provided by Reg Code and his Orchestra who were engaged following a successful run at the Athens Athletic Club. The building featured a 10,000 square foot polished oak dance floor, Moorish-themed interiors, and Colorama lighting - a unique system which used over 4,270 electric lamps to produce constantly changing colored light effects. Decorations were by internationally known mural painter Geoffrey Holt.

In 1937 the name of the venue was changed to the Mayfair. It was requisitioned for use by the U.S. Army during WWII, then re-opened as the Ali Baba on May 17, 1946. 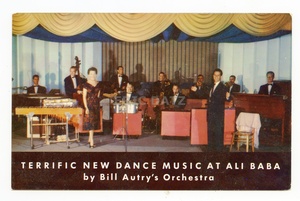 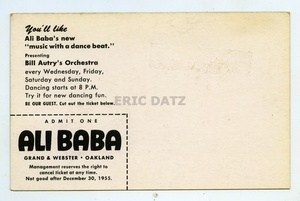 Ali Baba postcard reverse (circa mid-1950s)
(found on eBay)The Ali Baba again featured a Middle Eastern motif as well as theme nights and mood lighting —red for Latin numbers, blue for waltzes — and a well-known nook nicknamed the “make-out corner” by its frequenters. Upon entering the two-tiered palace, visitors would drop their ticket stubs into a treasure chest for a nightly drawing of prizes. The Ali Baba became the West Coast’s last remaining ballroom, surviving all through the 1970s disco years, until ordered to close by the City of Oakland in 1981. Patrons tried to save the historic ballroom by staging “dancing picket lines” in front of the building, but the city soon tore it down. 1

Sid Hoff led the band there for 21 of the 30 years between 1947 and 1977, the other nine years being on the hotel circuit, including the Claremont and the Lake Merritt Hotel. 2

The ballroom was considered a safe place for single women to go, and it was supervised and people were well-dressed. More than one person met their future spouse while dancing there, 3,6,7 including Jim Knuppe.

However, for many years it was also a "whites only" ballroom; people of color had to go to Sweet's. 5 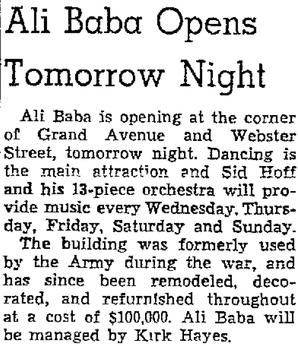 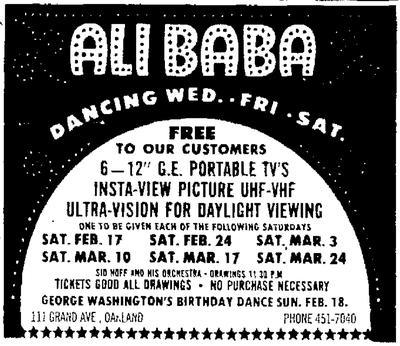 1973 ad. Note Sid Hoff and His Orchestra, and prize drawings 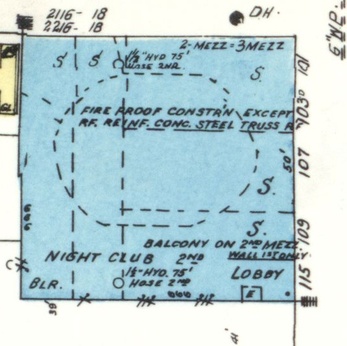