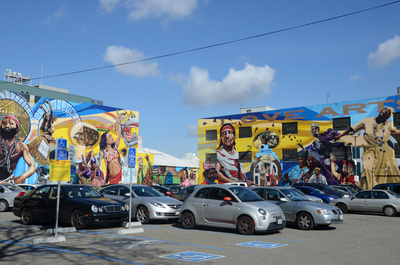 The Alice Street Mural Project is a project by the Community Rejuvenation Project that covers the walls  surrounding the parking lot at 1401 Alice Street across from the Malonga Casquelord Center and facing Hotel Oakland. It is over 2500 square feet. Sadly, it is no longer visible because of a new building constructed where the parking lot was.

The first phase of the project runs from July 2-Aug 3, 2014 and you can read about it here. The project came after 6 months of research and design as well as "first-person interviews, reviewing archival photos and other historical material, attending and filming numerous performances by Malonga-based dance companies and Hotel Oakland residents, navigating institutional bureaucracy, holding numerous community meetings which provided neighborhood input into the design process, hiring a Cantonese translator, and producing a successful IndieGoGo crowdfunding campaign and two trailers for an upcoming accompanying documentary film project, directed by Spencer Wilkinson."

There are lots of figures in the pictures- dancers of all cultures (Native American, African American, islander, Chinese dragon dancers), protestors with signs, Black Panthers, etc. On the back wall, you can see BART trains, people playing music, a person in a wheelchair, someone reading a copy of the Oakland Tribune that says "Oakland Elects First Asian American Mayor," a big headline that says "State of Emergency Declared in Emergency; General Strike Shuts Down the Town." There is a person jumping or dancing into the mural from above. A woman is crossing the ornate crosswalks of Oakland and a car from the key system is depicted. A woman plays the heart in front of a poster for the Oakland Ensemble Theatre. One of the side walls says "Remember 1882," the year of the Chinese Exclusion Act. An old-style picture features the Oakland Limited.

In the first picture, Youth dancers perform Deborah Vaughan’s “Rites of Passage.” The company, Dimensions Dance Theater, calls the Malonga Casquelourd Center for the Arts home. The inset is a picture of Oakland in the 1800s. Black Panthers (1st and 2nd pictures) protest in front of the Alameda County building.

In the 2nd picture, the man in the green jacket (lower left) is from a photo of Daniel Cruz protesting Wells Fargo, who forclosed on 6,000 loans in Alameda County between 2006 and 2013.  The man in the center of the second picture is Malonga Casquelourd. The pattern behind him is the stained glass from the Malonga Casquelourd Center for the Arts, a historic theater and arts space operated by Oakland Parks and Recreation, and the arches are on center’s façade.

The women dancing behind Casquelord are Zakariya Diouf and Naomi Gedo Diouf who run the Diamano Coura West African Dance Company. Zakariya Diouf is the former director of the Le Ballet National Du Senegal. Both have contributed to the development of African performing arts and arts education in the Bay Area.

Underneath them, protestors holding "Save the Alice" signs are shown storming into a city council meeting, protesting Jerry Brown’s 2003 decision to close down the Alice Arts Center, now called the Malonga Casquelourd Center for the Arts. 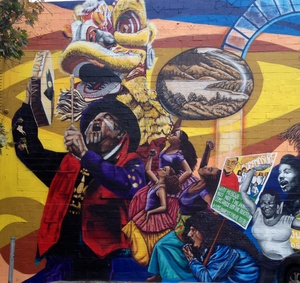 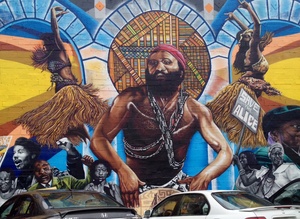 more dancers, protester with sign "Save the Alice." photo by greenkozi

Cephus Johnson holds a "We Shall Not be Moved" sign protesting the killing of his nephew Oscar Grant III.

The inset is an old picture of 16th and Telegraph, the original location of Chinatown. The woman in red pants is Carla Service who began Dance-A-Vision as a safe haven for teenagers. She then partnered with the city of Oakland to offer free performance education to youth. 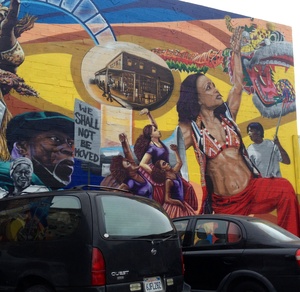 old building, "we shall not be moved," more dancers. photo by greenkozi 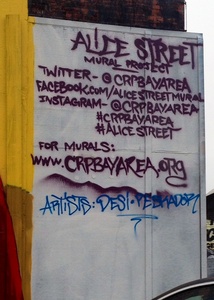 In the blue striped shirt, Ishmael Flory was a leading organizer of the Pullman Porters Union. The activism he developed in college (he graduated from UC Berkeley) shaped the path for the rest of his life.

The inset is the shipyards after WWII- many of Oakland's African Americans worked there.

The dog is not part of the mural.

The man in the wheelchair represents The AXIS Dance Company, a Malonga Center resident, which features disabled and able-bodied avant-garde dancers.

The headline in the background represents the 1946 state of emergency that was declared due to the 1946 general strike. The woman in the purple shirt is journalist Jerri Lange, one of the Bay Area’s first African-American women radio and TV personalities. She still lives on the Alice Street block. Next to her is journalist Chauncey Bailey who was killed while working on a story about Your Black Muslim Bakery in 2007 on 14th Street near Alice Street. He worked at the Oakland Post and The Oakland Tribune.

The trumpet player is Khalil Shaheed who served as one of the Bay Area’s most prominent jazz music educators. He founded the Oaktown Jazz Workshops.

In the middle of the wall on the left, a young businesswoman reads about Quan's election.

In the corner, Tyler Thompson, an African-American boy, was an unlikely Chinese opera star. He sang with Purple Silk Music Education Foundation in Oakland 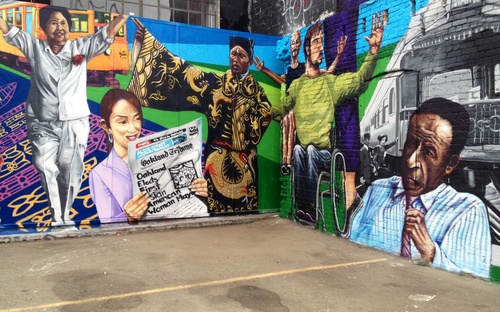 Harpist Destiny Muhammad who plays a genre called “Celtic to Coltrane,” is also known as the Harpist from the Hood. Next to her a flyer announces the Oakland Ensemble Theatre production of “Sisters,” which to this day, is the most successful production held at the venue. 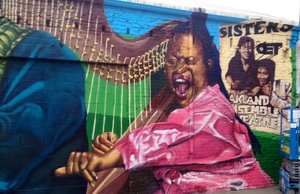 The inset is a reminder of the Chinese Exclusion Act of 1882 as well as Chinese entrepreneurship under the Act. A Hotel Oakland resident holds the photo for an exhibit celebrating the hotel’s centennial. Behind the figures, the railroads and street cars symbolize Chinese labor and displacement.

The red building is the pagoda at the Hong Lok Senior Center on 7th Street. Next to the pagoda is community historian Roy Chan, started the Oakland Chinatown Oral History Project, which includes an interactive map where visitors can listen to or record memories on a map of Chinatown.

The woman with baby is a Hotel Oakland resident carries her grandchild in a traditional wrap. Next to her, Lisi Yu teaches dance at Hotel Oakland. 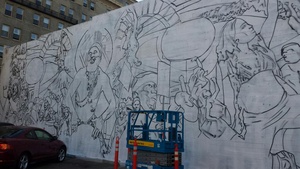 The mural design incorporates historical figures and events, cultural icons such as Malonga Casquelord and Jerri Lange, local historian Roy Chan, and neighborhood residents. The Alice Street mural design represents a fusion of the past, present and future communities of this particular neighborhood, with placemarking and holding the space for current communities to remain in the face of historical displacement and ongoing gentrification,” said CRP Executive Director and co-lead artist Desi Mundo. “Additionally, this mural creates an institutional memory for this important intersection at the heart of Oakland’s downtown, establishes a connecting link between the Afro-Diasporic and Chinese-language communities, and will serve as an important reminder of Oakland’s cultural diversity for years to come.”

Phase II of the project is scheduled to begin in August; a block party/community celebration featuring live music and dance will be held at the completion, at 3:30 on August 8th. 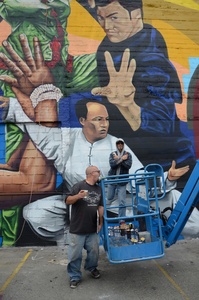