Allen David ("A.D.") Wilson (September 17, 1844 – February 21, 1920) was a cartographer, and was the step-son of Frederick Rhoda and half-brother of Reverend Franklin Rhoda. He was also one of the founders of the Athenian Bank.

In the 1860s, there were four "great surveys" of the west. Wilson worked on Ferdinand V. Hayden's survey of Colorado, western Wyoming, and Idaho. When Hayden's Survey was merged with the others to form the United States Geological Survey (USGS) in 1879, Wilson was appointed chief cartographer by director Clarence King. 2 Mount Wilson in Colorado was named for him. 1

Wilson moved to Oakland in the 1890s. Allen married Amelia Stevens, daughter of Captain Levi Stevens in 1895, but they had no children. They lived on Fruitvale Avenue near the Stevens estate.

Wilson was one of the organizers of the Athenian Bank, which later became the Security Bank and Trust of Oakland. In 1918 it was absorbed by the Bank of Italy, which soon became Bank of America.

Wilson died of influenza on February 21, 1920, and is buried in plot 33 in the Rhoda family lot in Mountain View Cemetery, along with numerous Rhoda family members. 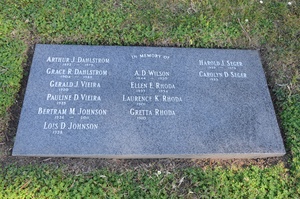