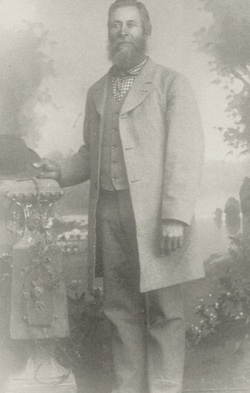 Alvin Aaron Coffey, Sr. (July 14, 1822 – October 28, 1902) was the only African American member of the California Society of Pioneers. Coffey was born a slave in Mason County, Kentucky as the property of Margaret Cooke. He was the son of Lewis (Larkin) Coffey and Nellie Cook[e].

In 1834 Coffey was purchased by Henry H. Duvall and taken to Missouri, where he was then sold in 1846 to Dr. William Bassett.

During the spring of 1849 Coffey was brought to California by Dr. Bassett to work in the gold mines. They departed from St. Joseph, Missouri for the five month's journey via wagon train to California on May 2, 1849. At the time of the trip Coffey and Mahala already had two children, and she was pregnant with their third child. Coffey and Bassett finally arrived on October 13, 1849 in Redding Springs, California, where Coffey was set to work searching for gold "on behalf of Dr. Bassett and himself." 2

As Bassett was sick the entire time the two were in California, in 1851 he decided they would return to Missouri. During the thirteen months working in California, Coffey had earned $5,500 for Bassett digging gold, and $616 for himself washing the clothes of nearby miners. But Dr. Bassett kept for himself all the money Coffey had earned digging gold, including Coffey's $616.  Back in Missouri, Bassett sold Coffey for $1,000 to Mary Tindall, first cousin of Coffey's wife, Mahala. Another slave owner Nelson Tindall (a relation to Mary Tindall? Perhaps Mary's husband? Possibly Mahala's father?) owned Mahala, Coffey's wife, along with their three children.

Coffey persuaded Nelson Tindall to allow him to go back to California in order to continue searching for gold in order to buy his freedom. It appears that Coffey was not accompanied by his new owner Nelson Tindall when he journeyed back to California, although one account does state that in 1854 Coffey returned to California with another slave owner , and was able to save $7,000* (*various accounts list different sums earned/saved by Coffey) by working the Placer County gold mines with which he bought his own freedom as well as the freedom of his entire family.

When Alvin Coffey was 34 years old, he had saved enough money to purchase his own freedom for $1,000 on July 24, 1856. Continuing to mine for gold, by 1857 Coffey had earned another $3,500 to buy freedom for his family. He brought back to California from Missouri his wife and three sons, and the two oldest daughters (there are conflicting accounts that the three youngest children were sent to live with their grandmother) went to live with their grandmother in Canada. Alvin and Mahala's next son was born free in California on December 22, 1858, and in 1860 Coffey was able to reunite the entire family, bringing the two daughters back to California from Canada.

Homesteading in Shasta County, California, the Coffey family children attended a school he helped found in 1858 for the African American and Native American children of Shasta County. Coffey owned and operated a laundry, raised turkeys, and in 1872 during the Modoc Indian Wars provided horses to the U.S. Army.

Coffey was interviewed for the Book of Reminiscences, in which he described his journeys to California, as well as his extensive history in the early days of California. The historical account located at the Library of the California Society of Pioneers, located in San Francisco on McAllister Street, near Van Ness Street.

Alvin Coffey was inducted into the California Society of Pioneers in 1887, and for over 15 years prior to his death was a member in good standing of the organization.

Alvin A. Coffey died in Oakland, California (in an adjoining town known at that time as "Beulah," which is now part of Oakland) and is buried in the Oak Hill Cemetery in Red Bluff, California, located in Tehama County. It was noted that "... in the final years of his life he became the prime mover in the organization of the Home for the Aged and Infirm, located near Beulah, California, giving his total income to its establishment and support." 1

Fellow members of the California Society of Pioneers prepared a paragraph from Alvin Coffey's obituary which appeared in the Library of the Society of Pioneers. In their tribute was the statement “Alvin Coffey was a noble man, ever generous to his unfortunate neighbor. Perfectly honest, he paid every debt he owed and was brave.” 1

The following is Alvin Aaron Coffey's obituary which was published in the Red Bluff News on Thursday, October 30, 1902:

"DEATH OF A WELL KNOWN COLORED MAN -- Alvin A. Coffey Sr. died Tuesday night at the Home of Aged and Infirm Colored People, near Mills College, Alameda county, from old age. The deceased was well known in the northern part of this state where in early days he was engaged in teaming to the northern mines. Later he owned a farm on Elder Creek where with his family he resided for many years. He came to California in 1849 where he has since resided continuously. He only once went east, then to purchase the freedom of his wife and elder children. He was a member of the California Pioneers. He was the father of John W., Alvin A. Jr., Stephen and C.O.Coffey, Mrs. Doc Logan, Mrs. Pindell of Boston and the grandfather of Mrs. C.E. Christian of this place. The remains will be brought to this place for burial and will arrive on the afternoon train today. The funeral will take place from the train." Died of old age. Buried Oak Hill Cemetery, Red Bluff, Tehama county, California Lot 9,Block 18, Grave 2

* Mahala Tindall (Coffey) was born a slave and was the personal property of her first cousin, Mary Tindall, who was later the owner of Alvin A. Coffey.

One account is "When [Coffey] saved the required amount of $1,000 to purchase his freedom, he did so by notifying his owner that he had the money and the owner, trusting Coffey, sent his freedom papers before receiving a cent." 3

Alvin A. Coffey's most prized possession, his Emancipation Papers, can be found at the California Society of Pioneers, in San Francisco. The "Deed of Emancipation" reads in part, "In the presence of Almighty God and of these witnesses this day and year above written, I herewith affix my hand and seal to liberate, emancipate, discharge and set free the said Alvin A. Coffey for the valid consideration of one thousand dollars the receipt whereof is hereby acknowledged in full."

Verification of the emancipation of his five children, and wife, can be found at the Saint Louis Circuit Court, Vol. 26, page 37 in St. Louis Missouri.

Alvin Coffey's autobiography, Book of Reminiscences, is one of the only first-hand accounts of an African American pioneer.

There is a U.S. Census Record for the 1900 Census listing Alvin Coffey, born 1822 in Missouri, 78 years old in 1900 U.S. Census, Residing in Precinct3 Fruitvale town, Alameda County, California, as a "Boarder" and in the 'Details' as "Widowed, White, and Male."

In 2010 the great-great-granddaughter of Alvin Coffey, Jeanette Molson of Woodland, California, co-authored (along with E.D. Blansett, Jr.) a book on his life, The Torturous Road to Freedom: The Life of Alvin Aaron Coffey.