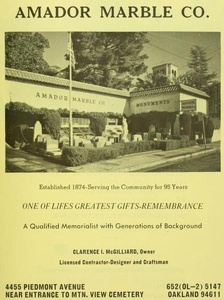 In 1868, the Amador Marble Company bought a one acre site next to Mountain View Cemetery which had opened in 1865.

The company started with a quarry in Amador County in 1866. 3 The company was organized in 1869 by Hiram Tubbs, one of the original cemetery trustees, and William Collins, who was secretary of the Mountain View Cemetery Association and later the superintendent. 2

Employing a dozen stone cutters, the company turned out 10,000' of granite and 20,000' of marble worth over $70,000 annually. The marble was imported from as far away as Scotland, Belgium and Italy, in addition to granite from Barre, Quinsey, Red Beach and Westerly.

Collins' son David Edward Collins took over the company after his father. 2

In 1978, Bob McCarthy bought the business, and a few years later changed the name to Amador Memorial Company. 1