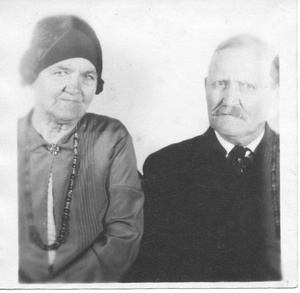 Emma and Andrew, Anderson family archivesAndrew (Anders) B. Anderson (March 9, 1862 – June 20, 1936) was a deckhand on the ferryboat Piedmont. He worked as a deckhand from at least 1893 to at least 1920, though not necessarily always on the Piedmont. He was the great-grandfather of Oakland Wiki contributor Gene Anderson.

Anderson was born March 9, 1862 in the Halland province of Sweden. One of many children in a poor family, he left home at age 12 and found work as cabin boy on a ship. Sources vary, but sometime between 1876 and 1887, he came to the United States, and eventually came to the Bay Area. According to his 1922 passport application, it was in March, 1882. He became a naturalized citizen in San Francisco on November 14, 1892.

Andrew was a member of the Swedish Society, Branch No. 1, of Oakland, and of the Dirigo Lodge, No. 224, Knights of Pythias. 1 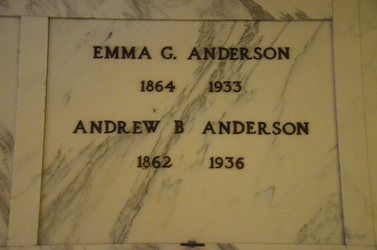 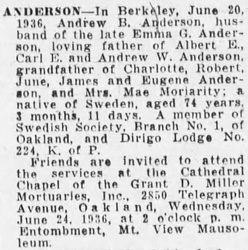