He came to California in 1850 aboard the steamer New World and settled in Oakland in 1856, when he built “one of the most elegant mansions which the young city could boast” at 5th and Clay Streets.

Although given the honorary title of “Colonel,” Williams was actually a lawyer, and a political opponent of the corrupt Horace Carpentier. 1 He kept an office in Oakland and seems to have lived in both Oakland and San Francisco (many references to him show his residence as having lived in San Francisco). His Oakland house (where his stepson Bret Harte also lived upon arriving in Oakland) was quite modern: it was the first house in Oakland to be built of lath and plaster. 2 Owing to a defective land title, he lost his Oakland home and moved back to San Francisco, afterwards going East to live.

A February 1857 speech he gave before one of Oakland’s first literary societies, the Philomathean Association, calling for the organization of a free circulating library led to his being called the father of the Oakland Public Library.

Williams was a founding member of Oakland’s Episcopal Church. 3 Williams was the stepfather of American author Bret Harte. Bret’s father Henry Harte, who died when his son was nine years old, had attended Union College with Williams. They became close friends and years later Williams courted his young widow, Elizabeth Ostrander Harte, in New York, before marrying her in San Francisco in 1853. The next year Bret and his sister came out to be reunited with their mother and to stay, for about a year, at her new household in Oakland. Williams has been described as a “good-natured, rather windy and pompous gentleman … just smart enough to prosper in business and politics,” and biographers of Harte generally agree that Williams served as a model for Harte’s rather bombastic character, Colonel Starbottles.

While on a trip from the East to visit a son living in Oakland, Andrew F. Williams died, and is buried in Mountain View Cemetery. 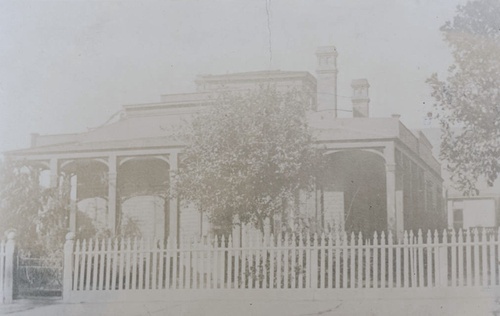 Col. Andrew F. Williams residence, located at the N.W. corner of 5th and Clay Streets, Oakland. Williams and his stepson Bret Harte lived during Harte’s childhood. It was later occupied by John W. Dwinelle, who would also serve as mayor of Oakland. 4