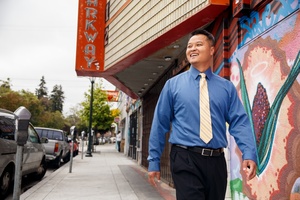 Andrew Park is a candidate for City Council in District 2 in 2014. See positions.

Andrew Park is Department Manager of the Physical Education/Biological Sciences Division at UC Berkeley, and the Founder and Executive Director of TRYBE, a youth focused non profit in the San Antonio neighborhood of Oakland. Park received a BA from UC Davis and a Doctor of Ministry from American Baptist Seminary (GTU) in partnership with Bakke Graduate University. Park has a wife, Alexandra Bareňo and four young children.

In District 2,  according to reports Park placed third in fundraising among the 4 candidates who filed reports.