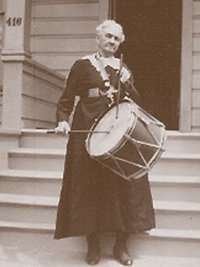 Annie Hunley Glud (1853 - 1929) (spelling of maiden name was later changed to "Hundley") was an eccentric Oaklander whose major claim to fame was that she served as a drummer boy during the Civil War. According to Glud, she dressed as a boy and accompanied her father into battle after the death of her mother.

Throughout her life, Glud participated in Oakland's annual Armistice Day parades, appearing with the drum. While there is doubt about the authenticity of some of her claims (she also said she found gold in the Sierra, and even found $5 worth of gold in Oakland), the papers at the time printed her Civil War activities as fact. 2,3 Glud was an active member of the Women and Girl Workers of the Civil War 61-65 (W. W. C. W.).

Glud and the W. W. C. W. sent President Warren G. Harding a bear carved from redwood as a gift in 1921. The cinnamon bear was carved by James Marshall, famous for being one of the individuals who discovered gold which lead to the California gold rush of 1849. 3

She is buried in Mountain View Cemetery. 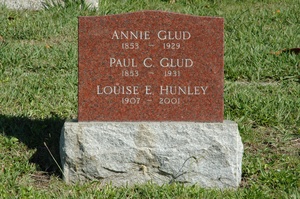