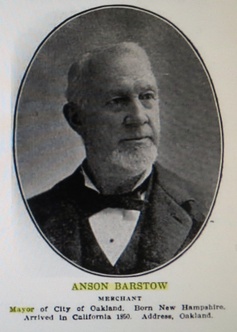 In Mayor Barstow's annual review of municipal affairs he advised that major improvements should be made to the city's sewer system. 1 In 1902 Barstow vetoed an ordinance that would grant W.A. Beasley and others a contract for new telephone poles and lines. He cited three main reasons: the ordinance would grant them a 50 year contract and he believed that things were changing too rapidly and no contract should extend longer than 25 years; streets were already very ugly and adding more poles and wires would make them uglier and more unsafe; and he didn't see how further competition in the telephone industry would help common people who would still have to pick one company or another.7

Together, Anson Barstow and Salmon M Babbitt formed the hay and grain, wood and coal business of Barstow & Babbitt. They were located at the Southeast corner of 13th and Franklin. 3 In September 26, 1885, Anson Barstow's employment was listed as the grain and coal dealing firm of Barstow & Babbitt. While still in the grain business, Barstow made the news by outsmarting safe-crackers. He locked his safe and hung a card outside of it complete with instructions and the combination. When he came back to work he found the safe open and a bundle of matches- all that he had left there to begin with. This story made the paper. 9

While mayor, Barstow attended the California Chinese Exclusion Convention in San Francisco, November 21 - 22, 1901, along with many California city council members and mayors. The convention was "composed of 3,000 delegates from State, County, and Municipal bodies, Civic, Labor, and Commercial organizations." 4

Barstow died suddenly in 1906 of apoplexy after a trip to the East Coast. He was a member of the First Presbyterian Church but had such serious beef with the pastor of that church that he asked, before his death, for the pastor of the First Congregational Church to preside at his funeral. 5 Upon his death, his estate was valued at $40,000 and was distributed amongst 16 family members and a friend of his wife's. 8 This was still being discussed in the press in 1909. Anson Barstow is buried in Mountain View Cemetery.