Aramis Matthews/Mathew Fouché (1904 – 2001) was the owner and director of Fouché's Hudson Funeral Home from 1944 until his death in 2001. NB: His grave marker says Matthews for his middle name, but his obituary and other resources say Mathew.

According to his obituary published in the Alameda Times-Star, he was a graduate of UC Santa Barbara and the California College of Embalming. 1

He was co-Founder and chairman of the Board of Trans Bay Federal Savings and Loan of San Francisco and First National Bank of Oakland.

He managed and was lead singer with the Dixie Jubilee Quartet. They toured the western U.S. and appeared in several movies including, "Green Pastures" and "Cabin in the Sky".

Fouche was a 33rd degree Mason.

He was a trustee of the First African Methodist Episcopal Church of Oakland when FAME dedicated its new building in 1951 (as was Byron Rumford). At some point the stretch of 37th Street between the funeral home and FAME was renamed in his honor. 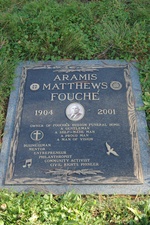 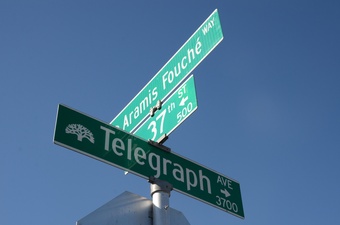