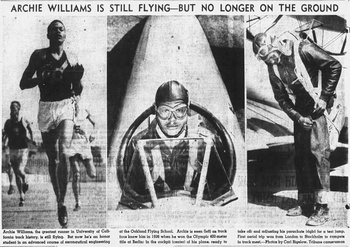 Archie Franklin Williams (May 1, 1915 – June 24, 1993) was an Olympic athlete, WWII pilot, and legendary teacher. He won the Gold Medal in the 400 meter race at the 1936 Berlin Summer Olympics, was one of only 14 Black pilots commissioned to the aviation meteorological cadet program during WWII, and was a high school teacher who loved to teach and help his students. Williams was the grandson of noted civic leader Fannie Franklin Wall.

NB: Archie said in an interview that his name is "Archie," not Archibald. Likewise his grandfather was Archy. 7

Williams was born in Oakland to Wadsworth Franklin Williams and Lillian F. Wall (Williams), the oldest of 3 children. He grew up in various places in Oakland and Berkeley, 1,12 including 584 - 43rd Street (c.1920), and later 6114 Telegraph Avenue, his grandmother's home. His father died when Archie was about 10 years old, and he was raised by his mother and grandmother. 7

Along with some friends, he built a small boat that he could sail on Lake Merritt. He was also a poet—his aunt, Florence Williams (Murray), collected them in a box and hoped to publish them. 13

After graduation from high school, Williams went on to San Mateo Junior College where he ran track & field, before transferring to UC Berkeley, where he majored in mechanical engineering. His college counselor discouraged him from becoming an engineer, saying he wouldn't be hired because he was Black. 7 Williams was a member of Alpha Phi Alpha Fraternity. 6,7

At Berkeley, he was coached and mentored by noted track coach Brutus Hamilton. Williams described him as "a father figure." 12 At the 1936 NCAA championships, Williams set a world record in the 400 meters with a time of 46.1 seconds in the preliminaries and won with a time of 47.0. He followed that with his gold medal win at the Olympics. Williams later said that Adolf Hitler refused to shake hands with both himself and Jesse Owens. 2

"Archie F. Williams was one of the legendary African-American track stars whose decisive victories at the 1936 Berlin Olympics publicly demolished Hitler's propaganda of Aryan supremacy." 3

Upon returning to Oakland, he was given a parade. 11 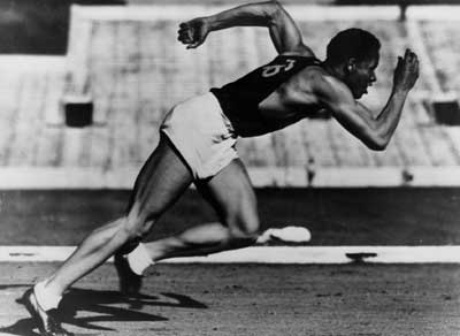 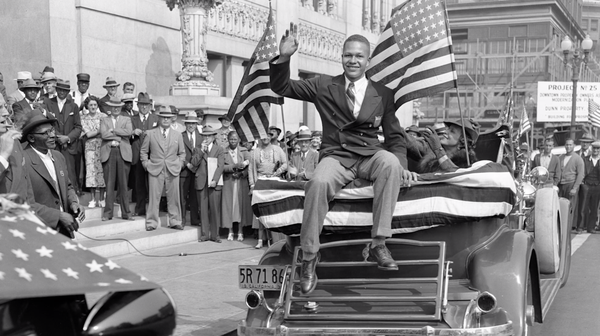 Williams had been interested in airplanes from an early age, entering a Tribune model airplane contest in 1931. 7,8 The first Civilian Pilot Training class in 1939 was conducted in Oakland and Williams was one of the pilot trainees. He earned his pilot's license, followed by his instructor rating.

Unable to do much teaching in the Bay Area, he went to Tuskegee, Alabama, in 1941. He started teaching in the civilian program, then later in the "army primary program." 7

While in Tuskegee, he met Vesta Anne Young (Williams) and they married in 1942. They had two sons, Archie Williams, Jr. and Carlos Williams.

As an army reservist, Williams was called up into the aviation meteorological cadet program at UCLA. He graduated in 1943 and returned to Tuskegee. 7

With the start of the Korean War in 1950, Williams was sent overseas. Vesta joined him and they lived in Japan for almost two years. Later he had assignments in New York state and then Alaska. 7

Following his military retirement in 1964, Williams started teaching math and computers at the former Sir Francis Drake High School in San Anselmo, California. He taught for over 20 years before retiring at the age of 72. 1

Williams died in Fairfax, California in 1993 at the age of 78. He and Vesta are buried in the San Francisco National Cemetery at the Presidio, where his grandparents are buried, too.

In 2021, the former Drake High was renamed Archie Williams High School in his honor. 1

[ * Although Wikipedia and af.mil both say this picture is Williams at the 1936 Olympics, this is at Edwards Track Stadium at UC Berkeley based on the shape of the stands and the fact the stands are empty. A later Tribune photo also identifies it as Berkeley. - Gene ] [Also note the dark shirt, matching the color of shirts he wore for the Cal track team, not the white shirts worn in Berlin - NAParish]

Wonderful quote attributed to Archie Williams “When I came home, somebody asked me, ‘How did those dirty Nazis treat you?’ I replied that I didn’t see any dirty Nazis, just a lot of nice German people. And I didn’t have to ride in the back of the bus over there.” 4,9

When asked about the present-day (c.1988) Olympics, Williams said:

And I certainly didn't care for the boycott in 1980. That was about human rights, wasn't it? Well, you look at John Carlos and Tommie Smith in 1968. They were talking about human rights in this country, and look how they were treated. I think we have a lot of things to look at right in our country. People have asked me, they say, "What did you think of those 'traitors' on the victory stand in 1968?" Well, I know what they want me to say. . . but I believe it took a lot of courage for those guys to do what they did. They deserve respect for that, and I feel very strongly about it. 12 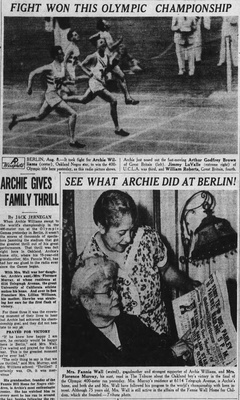