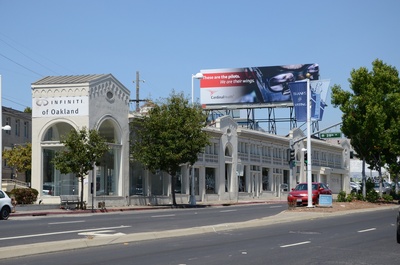 The Arnstein-Field and Lee Star Showroom is located at 2801-25 Broadway and was built in 1916. It has been used by a variety of automobile dealers over the years, and is currently the headquarters for Infiniti of Oakland.

From 1906 to 1916, the address was the location of the Merrick Bakery, which had previously been downtown. 1 In 1916, construction of the current building started for Mathewson Motors, 2 which sold a variety of different auto makes over the years, but initially sold Chevrolets.

The building was used as the Field and Lee showroom from about 1924 to about 1926. 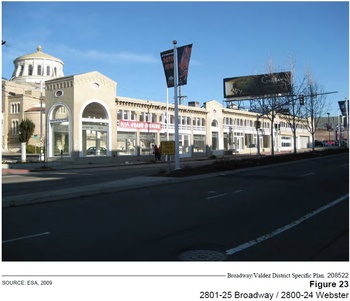 From the BVDSP Historic Resources Inventory Report
(public domain)2801-25 Broadway / 2800-24 Webster (Arnstein-Field & Lee Star showroom): 2801-25 Broadway / 2800-24 Webster is a single story Beaux Arts derivative Spanish Colonial commercial building built in 1916. The long, flatiron building extends approximately 200 feet, and has four peaked parapets on each side over arched doors or windows with fan lights. Exterior walls are stucco with large plate glass storefront windows. As part of the 1994 URM Survey, this property was assigned a rating of Cb+2+ by the OCHS, and a National Register Status Code of “7” on DPR form 523 B, which indicates that it was not evaluated for National Register (NR) or California Register (CR). From visual inspection by ESA in March 2009, the property appears restored from when it was originally evaluated in 1994, with the removal of modern ornamentation. It is the professional opinion of ESA that the building currently possesses a B2+ rating. The building at 2801-25 Broadway / 2800-24 Webster is therefore considered an historical resource for CEQA purposes