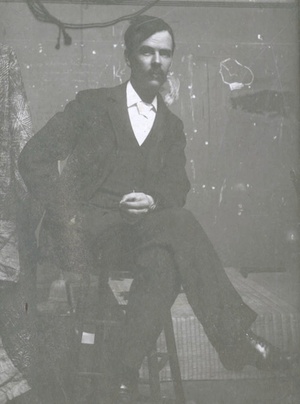 Arthur F. Mathews, photographed by Isabel Porter Collins (circa 1900) 2Arthur Frank Mathews (1860–1945) was an artist (painter), muralist, and designer. Born in Wisconsin, he came to Oakland at the age of 6 with his family. He was big into the Arts & Crafts movement, and founded Philopis Press in 1906.1

Mathews was married to artist Lucia Kleinhans Mathews, and together they "had a significant effect on the evolution of Californian art in the late 19th and early 20th centuries."

Mathews art works are "extensively represented in the Oakland Museum of California."