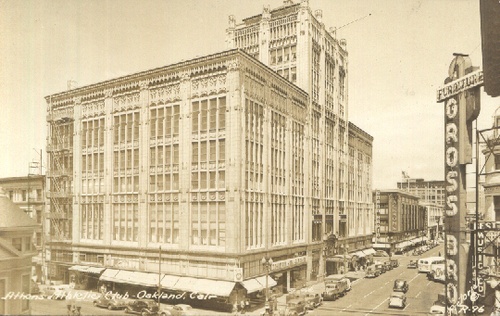 Athens Athletic Club, located on Clay Street between 12th and 13th Streets, Oakland, California was incorporated on April 7, 1921 and opened on September 29, 1925.  Founded in 1919, by 1921 the fashionable Club had enrolled 1,500 members from the East Bay business and professional community and was considered the most prestigious private social and cultural organization in the city of Oakland.

Although records of the actual costs vary, the club facility cost approximately $2,000,000* to construct, covered an entire city block and was 11 stories high. The gymnasium and 100 ft. x 35 ft. swimming pool were located on the fifth floor.  A total of 95 sleeping rooms made up a large part of the Club building.  They were completely furnished and equipped with private baths and showers.  Harry S. Anderson was acting chairman of the entertainment committee and was in charge of arranging a program of cabaret talent for opening night.  (* According to Polk's Directory of 1926, the Athens Club building cost $800,000 to build).

Ground breaking ceremony was held on July 2, 1924 with an open air boxing match.

Joseph R. Knowland became President of the Athens Athletic Club in 1925 and oversaw the opening of the $1.7 million clubhouse in Downtown Oakland.

In the early 1930's West Coast bandleader Tom Coakley and his orchestra played a two-year engagement at the Athens Athletic Club in Oakland. In 1930, membership was in excess of 2,800.  Babe Ruth paid homage to Oakland's baseball dean, Cal Ewing, at the club in November of 1931.

Dance music was broadcast from the Athens Athletic Club on radio station KLX, located on the 20th floor of the Oakland Tribune Tower.

On January 19, 1935 the Athens Athletic Club held a municipal banquet for Amelia Earhart.

In 1944 the National AAU diving competition was held at the Athens Athletic Club in Oakland, where Lyle Draves was the diving coach.  At the time, Lyle Draves was the coach of diver Zoe Ann Olsen, and became the coach of future Olympian Victoria Manalo Draves, whom he married on July 12, 1946.  At the 1948 Olympics, Manalo Draves won gold medals in both the platform and springboard diving events.

Ann Curtis Cuneo lost her title in the 100 yard free against 19 year old Brenda Helser in the National AAU women's indoor swimming and diving championships held at the club on April 15, 1944.

Eugene Edgar Trefethen was at one time a President of the Athens Athletic Club, as well as the Athenian-Nile Club.

President Harry S. Truman was hosted at a reception in the Oakland Room of the Athens Athletic Club on Saturday, October 4, 1952.

In the 1960s Paul L. Giomi was the Athletic Director of the club.

After the club closed, the building was purchased by the Synanon drug rehabilitation organization and converted into a residential facility for Synanon members. The Athens Athletic Club building was demolished on April 24, 1977. 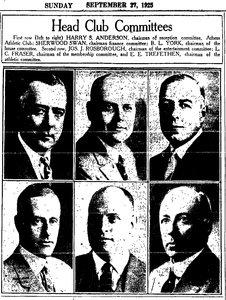 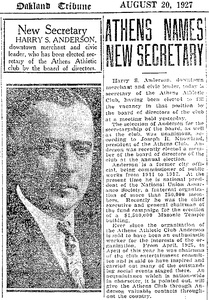 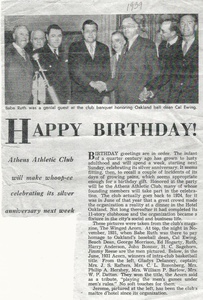 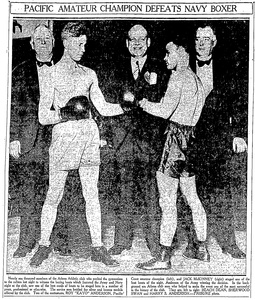 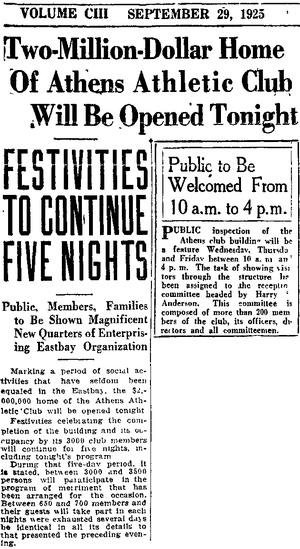