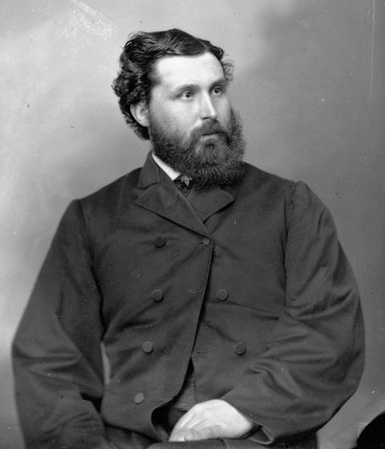 Born in Folkestone, England, he emigrated to the US in 1857, but quickly relocated to Canada. By 1858 he had set up business in Ottawa with a partner named Stent. Poor Mr. Stent got stuck doing all the prep work for some major commissions the team had accepted (namely the East and West Blocks of the Canadian Parliament Buildings), because in early 1859 Laver sailed back to England to get married. Stent abided though, and the two continued their collaboration until early 1865, whereupon Laver went solo, achieving double platinum status with his first al OK, just checking that you’re still paying attention. Maybe the solo route wasn’t happening, though, because by 1867 Laver had gone back into partnership with a more experienced architect (name of Fuller) to work on designing New York’s state capitol building in Albany.

In 1871, the Oakland connection you’ve no doubt been wondering about began to seem possible when Fuller & Laver won the contract (on the strength of their Albany building) for San Francisco’s City Hall. Laver moved to SF in October of that year in order to oversee the project. He took a huge pay cut to do so, mainly for his wife’s health – she had been unwell in the East, and doctors had advised a move to California.

Between the City Hall project (which was “plagued with difficulties”), and setting up a nice side business for wealthy Bay Area private clients (including Oakland’s own PJ and Ellen Kenna), 27 years flashed by … until the day Mr. Laver’s mortal coil shuffled off in Alameda. The kicker was, despite a number of successful private commissions, the dang-gone City Hall project remained incomplete. Perhaps it’s just as well that Mr. Laver died when he did: it might’ve killed him to see his still unfinished (!) City Hall burn down 8 years later, in the 1906 Earthquake/Fire.