On Fri. May 22nd 2015, it came out that OPD was following a new Peaceful Demonstration Advisory, issued by Mayor Libby Schaaf, that included a ban on nighttime street protests. This was applied on a #SayHerName protest on 5/22 with OPD shutting the march down and arresting a number of protesters.

On Sat. May 23rd and Sun May 24th, the BlackOUT Collective (and many others) marched in opposition to the ban. Protests were shut down by OPD and a number of protesters each night were arrested.

This policy was applied to one of the first protests after May 1st 2015 May Day protests when a number of Auto Row car dealerships had windows and cars smashed [more on what happened during May Day protests]. #SayHerName protest participant Anne Weills said "“I think because of Auto Row and what happened there, Mayor Schaaf has decided to get tough,” said Weils. “But for her to do this with this particular march, it’s just so indiscriminate.”" (2015/05/22, East Bay Express)

The first week of June, civil rights attorney Jim Chanin, Mayor Libby Schaaf and City Attorney Barbara Parker met to discuss the policy but didn't resolve anything. Chanin and the OPOA both agree that the current policy is not working. More info here. 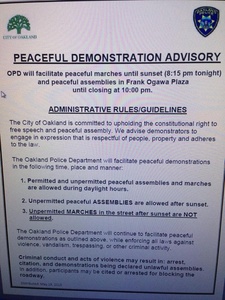 OPD will facilitate peaceful marches until sunset (8:15 pm tonight)
and peaceful assemblies in Frank Ogawa Plaza
until closing at 10:00 pm.

The City of Oakland is committed to upholding the constitutional rights to
free speech and peaceful assembly. We advise demonstrators to
engage in expression that is respectful of people, property and adheres
to the law.

The Oakland Police Department will facilitate peaceful demonstrations
in the following time, place and manner:

1. Permitted and unpermitted peaceful assemblies and marches
are allowed during daylight hours.

3. Unpermitted MARCHES in the street after sunset are NOT
allowed.

The Oakland Police Department will continue to facilitate peaceful
demonstrations as outlined above, while enforcing all laws against
violence, vandalism, trespassing, or other criminal activity.

Criminal conduct and acts of violence may result in: arrest,
citation, and demonstrations being declared unlawful assemblies.
In addition, participants may be cited or arrested for blocking the
roadway.

"she argued that it was a not new city law, but rather a reinterpretation of an existing one.

“There have been no changes to any city policy or enactment of any new ordinances in any way to prohibit peaceful protests,” Schaaf told the Express. “We are making better use of our existing policies to prevent vandalism and violence. Our intent is to ensure that freedom of expression is not compromised by illegal activity and that demonstrators, bystanders, and property are kept safe.”" (from the East Bay Express)

"However, one of the authors of Oakland's law governing OPD's response to protests said the new ban is illegal. “My general impression is the police took an unduly aggressive approach that not only violated their own crowd control policy, but also the First Amendment,” said civil rights attorney Rachel Lederman. Lederman helped draft Oakland’s existing crowd control policy. She said that OPD is not supposed to stop a march simply because it does not have a permit or because it enters the street.

“This was an unreasonable interference with the demonstration given that there had been no serious crimes committed,” said Lederman."  (from the East Bay Express)

California courts - maybe no? See this for more info.

2015-05-21: "Libby Schaaf orders OPD to crack down on nighttime protests and street marches in Oakland", IndyMedia