If you know the A's, you know Banjo Man (aka Stacy Samuels). He is about 64 years old and thinks the Coliseum is the greatest stadium in baseball... He's been playing at games for about 29 years. He walks around the stands in green and gold with a green cape and a propeller beanie hat playing, you guessed it, a banjo. You may not know that he is also a 49'ers fan. He switched allegiance to the A's from the Giants after the A's fired announcer Lon Simmons.  "A's games really were great fun to listen to when Lon and Bill King were around".

The A's gave Banjo Man a free pass for awhile but he currently pays for his tickets. They do give him permission to roam the stands with his banjo.

Banjo man sports a short beard, a small pony tail and a beautiful A's cape and of course an A's propeller be any cap.  He is a legend unique in professional sports and is known world wide.  While he loves the A's he had been quoted as hating  "the giants new fancy shmancy ballpark" of  which he says "it sucks  for watching a game, whereas the Coliseum has the greatest view from every seat and tremendous tailgating and weather".  However he has been supporting bay area teams for years and the ballpark has never stopped him from entertaining the fans and showing his support for all bay area teams.

Banjo Man (in his other life as Samuels) is the maker of the Propeller Hat/Propeller Beanie Cam, as seen here on the Berkeley Hat online store. His company is called Interstellar Propeller and is based in Berkeley. As of about 10 years ago, he had sold about 1.5 million caps, which apparently earned him enough money to send 4 kids through college! He is not, however, the inventor of the cap as commonly told. That honor goes to Ray Faraday Nelson. 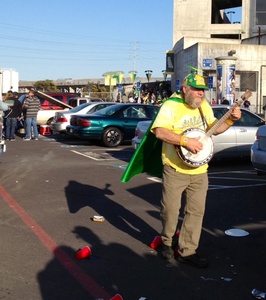 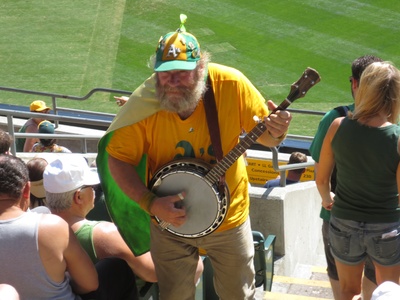 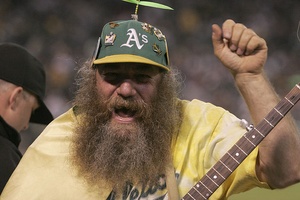