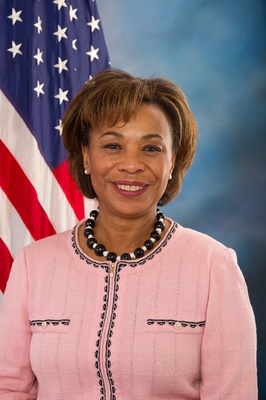 Always a strong voice, Congresswoman Lee was the only member of either the Senate or the House (420-1) that voted against giving the president a "blank check" for military force after the attacks on September 11, 2001. She believed the Authorization for Use of Military Force (AUMF) was overly broad. 1 For this (i think it was for this?) she earned a bumper sticker that can be seen around town: "Barbara Lee Speaks for Me."

Barbara Lee attended Mills College (where she volunteered with the Black Panthers 1) in Oakland, followed by enrollment at UC Berkeley where she earned a Master in Social Work.

According to her newsletter, 4/24/13 marks the 15th anniversary of Barbara Lee being elected to Congress in a special election.

Barbara Lee was the recipient of the East Bay Express Best Politician Readers' Poll Award in 2014 and 2015.