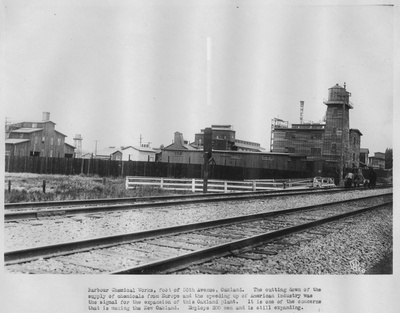 The main source of its barytes for producing barium compounds was the El Portal Mine Co. mine which was about 1 mile downstream from El Portal, just west of Yosemite Valley. 8 During WWI, it was under contract with the federal government to produce "acid for use in the making of high explosives." 11

There are few mentions of Barbour in the newspapers besides stories about the accidents. [ Trade journals and other sources suggest that sometime before 1920, Barbour had either moved to San Francisco or closed its Oakland plant. 7 Possibly following the explosion in 1918? 10 It's also possible the headquarters was and continued to be in SF. ]

In 1916, Leo Lombardi fell into a tank of barium chloride. He was able to free himself, but died later of his injuries. 2,13

A July 1917 accident led to 2 fatalities and several injuries. Manuel Vierra was sent into a tank to clean it or fell in, and was overcome by fumes. Frank M. Gonsalves attempted to rescue him and was also overcome. Others, including James W. Bradshaw, Sr.; James W. Bradshaw, Jr.; August Mendoza and Wilbur Smith were injured in rescue attempts. Finally, firefighter Emil C. Alvers, wearing a Draeger helmet with a compressed air supply, was able to rescue the men. Gonsalves died after being removed from the tank. Vierra died two days later. 3,4,5

Gonsalves' widow Julia Gonsalves was given a settlement by Barbour and the Guardian Casualty Company of $2,023.91, of which she planned to spend $1,900 on purchasing their home. She originally won a weekly payment, but refused that in preference for a lump sum. At this time, an article says the Gonsalves had 13 children, and Julia was supporting them all on $90 a month earned by the oldest 3 children working at the cotton mills. 6

In 1918, a "mysterious explosion" destroyed a barium sulphate tank and damaged the building it was in. The blast was felt 10 miles away. 10 The justice department investigated, to try to determine if spies might have been involved. 11