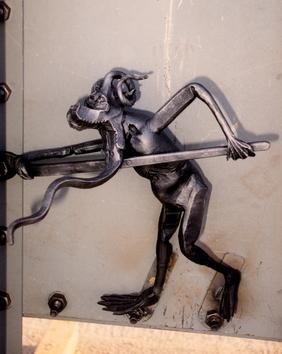 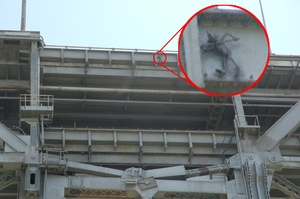 The first troll (aka Troll Senior) was created by Bay Area blacksmith and artist Bill Roan, and was affixed to the bridge during the repairs following the 1989 Loma Prieta earthquake. He was working with Michael Bondi Metal Design on the repairs, when Bondi suggested the idea to him. Senior was installed secretly, without approval from CalTrans. He lived there in relative secrecy, until a 1990 San Francisco Chronicle story let the word out. CalTrans wasn't happy, but they let Senior stay.

Following the completion and opening of the new eastern span in 2013, Senior was removed from the old span. There were discussions about what to do with him, including whether to attach him to the new span. He lived for a time at the Oakland Museum of California 2 while CalTrans decided his fate. Senior now lives at the CalTrans District 4 office on Grand Avenue. In 2013, a white paper was published on the Bay Bridge project site, which recommended a new troll be installed to safeguard the new span:

"While no causal relationship can be established between the presence of the Bay Bridge troll and the absence of any earthquake-related interruptions to the Bay Bridge’s service during the past 24 years, the correlation cannot be denied. Following the Latin principle, Primum non nocere (First, do no harm), the Project Management Team further recommends that another troll statue be created to guard the Bay Bridge; installed on or near the new East Span, this new troll may provide a possible extra measure of safety for the new East Span itself, and for motorists, bicyclists and pedestrians crossing the new bridge." 3

In December 2013, it was announced that a new troll (aka Troll Junior) had been created and was to be placed on the new span. 1 He was placed under the bridge near the eastern end of the suspended section at tower E2, and is said to be visible from the pedestrian and bicycle pathway. The video from journalist Mark Jones gives additional clues as to Junior's location. 4 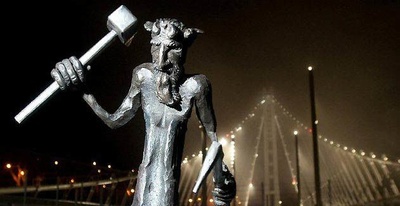