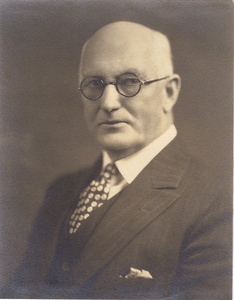 Benjamin F. Stetson was born in Hustisford, Wisconsin on December 9th, 1860, the same year his parents, who were farmers, moved to Hustisford from Sangerfield, New York. When he was between the age of 12 and 15 his family moved to Horicon, Wisconsin. In his early 20's the family moved again to Fremont, Nebraska, finally settling in Creighton, Nebraska around 1884. He married Cecelia Marie Salick in Jefferson Co., WI in 1885 and the couple moved to Plainview, Nebraska the same year. The first four of their children were born in Plainview, where Stetson supported his growing family as a druggist. 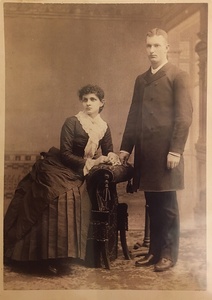 During this time he managed to attend college in Chicago, graduating from the Bennett College of Eclectic Medicine and Surgery in March of 1890.  That same year, their first born died at the age of only four years and their fourth child was born three weeks later. The family moved to Oakland, California, where Dr. Stetson got his Alameda County medical certificate in November of 1890. He maintained a medical practice there until 1908. The couple had six more children in Oakland.

Dr. Stetson was appointed to the chair of the Practice of Medicine in the California Medical College in 1892 and was advanced to Chief of Staff. At the close of the year 1907 he resigned to take the position of chief of staff of Materia Medica and Therapeutics.  He was President of the California Eclectic Medical College when it was agreed to move the College from San Francisco to Los Angeles due to losses by the College caused by the 1906 fire.  He was elected President of the Board of Trustees of the College in 1905 to 1908.2,6

Dr. Stetson was an early adopter of the x-ray machine [and one of the first surgeons to successfully perform open-chest heart massage.a]  In 1908 he served as Treasurer of the Alva Pomba Council which met at the I.D.E.S. Hall at 16th St (Foothill) & 18th Avenue.4 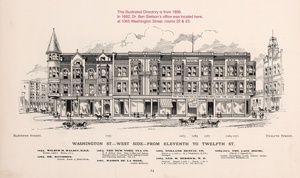 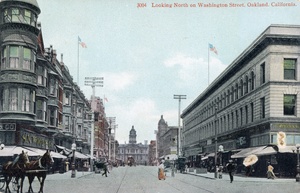 From 1895 to 1897 his office was at 1116 Washington Street. Both of these blocks were demolished in the late 60's to make way for construction of Oakland City Center. It is possible to get somewhat of a feeling for what this part of town was like in the 1890's by visiting Old Oakland, which has many fine commercial buildings dating from this period. Just imagine it with streetcars, horses and buggies but no cars. The streets were still lit by gaslight in those days. 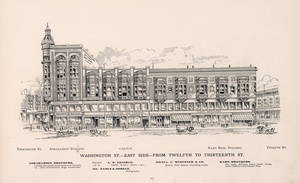 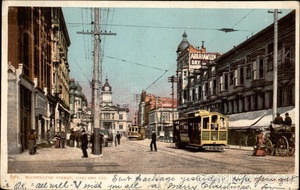 Dr. Stetson's office was on the right, above streetcar.

From his home in East Oakland, or Brooklyn as it was formerly known, Dr. Ben probably would have taken the streetcar to downtown. Looking north as it was passing by Lake Merritt on the 12th Street bridge the scene would have looked somewhat like this picture, taken in 1890 (Oakland Public Library Photo): In 1898 Dr. Ben lectured on Materia Medica at Fabiola Hospital and became an attending physician and surgeon there in 1899. 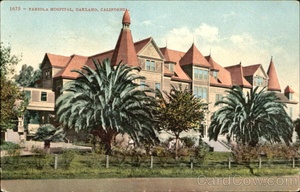 Dr. Ben was involved somewhat in local politics and was nominated in 1899 for Library Trustee in the Democratic Municipal Convention. In 1901 he was recommended as delegate to the City Democratic primary convention.

In 1900 Dr. Ben was an officer of the Oakland "Tent" of the Maccabean Order. They built a new temple that year at the corner of 11th Street and Clay Street. As of 2017, the building is still there but in the shadow of encroaching highrises. 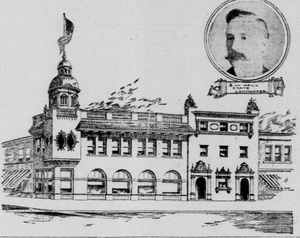 From 1897 until 1906, Dr. Stetson's office was in the Central Bank Building which stood at the corner of Broadway and 14th Street.  The building was heavily damaged by the 1906 earthquake which probably forced him to move out. 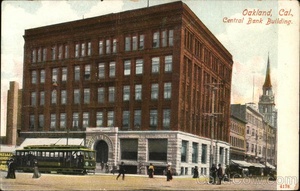 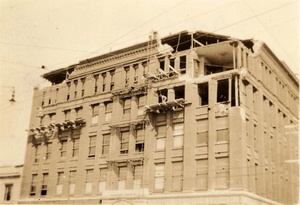 He served as Treasurer of the Alva Pomba Council in 1908.

He relocated his office after the earthquake to 1194 23rd Avenue and was there until he closed his practice to move to Napa in 1908.

The Stetson ranch was located on Big Ranch Road in Napa. There, Dr. Ben raised prize Holstein-Friesian  dairy cows and in the 1910 census he calls himself a "farmer, dairy". He was President of the Napa County Farm Bureau for three years and Director of the Salvador District. In June 1918, this notice appeared in Pacific Rural Press: "Dr Ben Stetson of Napa has enlisted in the Reserve Medical Corps and his son is in France, so he has practically closed out his Berkshire and Holstein breeding business. A younger son will care for the few cows and pigs that are left.  He sold 13 sows last week to Supt W M Holbert of the Stanford Vina Ranch hog department." 3 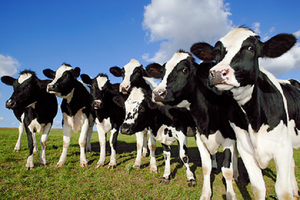 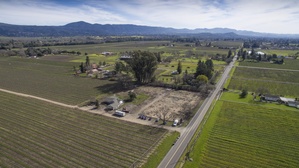 The family returned to Oakland in 1918 so Dr. Ben could help control the Flu Pandemic. Cecelia died November 14th, 1919, of heart valve disease.  Dr. Stetson stayed in Oakland and continued his practice. In 1924 he married his second wife, Agnes Fitton Stetson, a violinist and music teacher. He served Oakland's monastery of Poor Clares as their only doctor. He passed away in 1940. 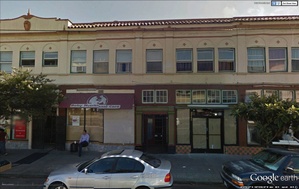 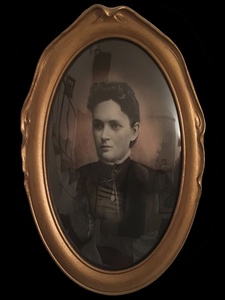 Though his obituary states he was interred in Napa, his grave was moved to the Holy Sepulcher Cemetery in Hayward on Agnes' death in 1954.  Dr. Stetson's parents, Benjamin Franklin Stetson (1825-1897) and Eunice Lucinda Stetson (1832 - 1908), were buried at Mountainview Cemetery at Dr. Ben's request, though they only lived in Oakland for one year.

Dr. Benjamin F. Stetson was a brilliant, hard-working man who lived his life in broad strokes and in the service of others. 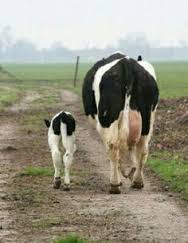 1.  The Illustrated Directory of Oakland, California, 1896.

4.  Polk's and Husted's Directories of Oakland, Berkeley, and Alameda