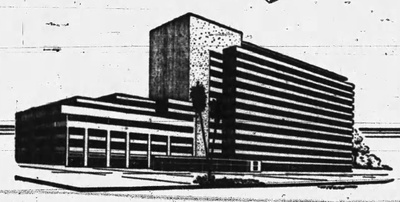 The Bermuda Building was an office and commercial building at 2150 Franklin St. It was damaged in the 1989 Loma Prieta earthquake and later demolished.

The structure was actually two buildings which shared hallways and elevators. In 1955, 3 floors were added to an existing building. A few years later, a new 10-story building was constructed adjacent to it. 5 In 1963, an 11th floor was added on the roof, to house the Bermuda Athletic Club and the Bermuda Starlite Roof restaurant. 6

The building was damaged in the 1989 Loma Prieta earthquake, and sat abandoned for a number of years. The city seized it through eminent domain. 2 It was eventually torn down, and in late 2005, construction began of a new building, Center 21. 3,4