Bernard Ralph Maybeck (February 7, 1862 – October 3, 1957) was a noted Bay Area Tradition architect. He lived and worked in Berkeley, but executed some notable commissions in Oakland, and his influence on younger architects was considerable since among other things he taught at Cal. There is more to be written here about his interesting life, flitting around being sort of like the Cincinnatus Heine Miller of Bay Area architecture, designing the Palace of Fine Arts in San Francisco (a California city reportedly near Oakland), and mentoring (among others) Julia Morgan, etc. (What was up wit dat?) But for now, let’s get right to the …

The ravages of time have unfortunately left fewer of these standing than we would like.

Mr. Maybeck is buried in Mountain View Cemetery, in the garden area next to the largest mausoleum. Buried nearby are Wallen, Jacomena, Erna Maybeck Gannon, and William James Gannon. 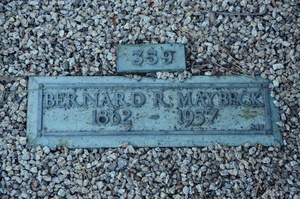