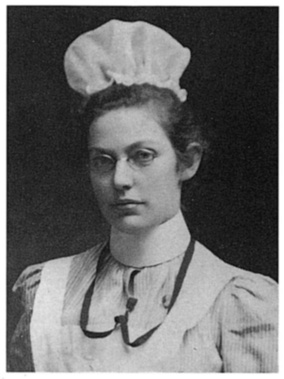 Bertha Wright (June 17, 1876–May 6, 1971) was a pioneering public health nurse who was one of the two original founders of the Baby Hospital, which later became Children's Hospital Oakland. Her uncle John T. Wright, Jr. and his family were the last residents of Camron-Stanford House.

Wright, born in San Francisco, was the daughter of Horatio Nelson Wright (June 8, 1840–April 25, 1925) and Frances Allen "Fanny" Cheever (Wright) (June 19, 1850–March 10, 1917). She graduated from the California Women's Hospital School of Nursing in San Francisco in 1901, where she had studied public health. Bertha Wright was employed as a visiting nurse, where she saw first-hand the urgent need of a hospital dedicated exclusively to the medical needs of babies. 1

Among her many accomplishments was as the first school nurse in Alameda County, and the first Alameda County public health nurse. Wright was also a highly successful fundraiser, clinical director and supervisor, instructor of postgraduate nursing students at University of California, Berkeley, and progressive activist in feminist causes.

As a formidable health activist who was considered by some to be a bit eccentric, Wright was a powerful woman who could stop people in their tracks with her stare.

Following the 1906 San Francisco Earthquake, the Nurse's Potrero Settlement House in San Francisco where she worked was destroyed, so Wright treated patients in a temporary tent in Golden Gate Park. With the population of Oakland and Berkeley nearly doubling in the three days after the earthquake, Wright became home secretary of the Charitable Organization Society which had been established "to confront the problems of illness, disability, poverty and unemployment, which had all been exacerbated by the disaster." 2

"At the time, San Francisco had no public or tax-supported entities to deal with homeless children, public health or child labor. However, thanks to Wright’s influence, the Berkeley Day Hospital and Berkeley Clinic began to provide services to those in need. Wright also oversaw the establishment of the Berkeley Day Nursery, the first publicly subsidized child day care center in California. Wright was a highly successful fundraiser for these organizations, well known for the drama and pathos of her appeals." 2

In 1909, Bertha resigned as secretary of the Charitable Organization Society to become the district nurse for the Berkeley Schools, and her friend Mabel Weed took over the secretary position. 3 "[Bertha] often used a horse and buggy for home visits." 2

See the History of Children's Hospital for more information.

"As district nurse, Wright became increasingly aware of the need for a hospital to care for infant children. In 1912, she and a group of local women held a planning meeting for such a facility. Within a week, bylaws were written and an all-female board of managers was elected to direct a new Baby Hospital in Oakland. Although fundraising responsibilities for the new hospital were partly delegated to an all-male board of managers, a strong women’s auxiliary began at the same time."

"The Baby Hospital opened in 1914 with 38 beds in an old, dilapidated mansion. Surroundings were rough in the beginning: The clinic was in a former donkey stall, while the former harness room was refashioned as a treatment room. According to a fundraising flyer of the time, the entire hospital could be run for only $12,000 a year."

"Under Wright’s direction, the Baby Hospital offered a novel prepaid health plan for young children. For the princely sum of $1, families could enroll a child in a plan that provided all necessary care. However, Wright asserted, “No child will be refused care because its parents are unable to pay the dollar.”"

"Thanks to the new hospital and Wright’s efforts, by 1916 Oakland had one of the lowest infant mortality rates in the entire country. As part of its services, the Baby Hospital’s maternity clinic even offered home deliveries and 10 daily postpartum visits from a registered nurse." 2

Bertha Wright and Mabel Weed met when both were working at the Charity Organization Society in Berkeley. The two women formed a household, and Mabel adopted three children: Philip, Alice Barbara and Jean. They also raised a number of foster children together. When Bertha retired from the hospital in 1926, she and Mabel moved to San Francisco, Woodside and then to Palo Alto, California.

The 1940 Census lists both living at 1018 Forest Avenue, Palo Alto, with Mabel Weed (age 68) as the Head of Household, and Bertha Wright (age 62), along with 16-year-old daughter Jean C. Weed and a lodger (foster child).

Bertha Wright's sister Alice Bowman "Ada" Wright (November 1, 1878–December 4, 1951) was a schoolteacher in San Francisco. Following her retirement she lived Monday through Friday with Bertha in Palo Alto, and weekends in San Francisco. Ada died at Bertha's home. Ada was cremated and the whereabouts of her ashes are unknown. 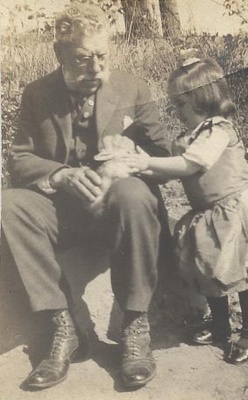 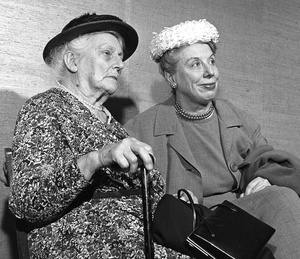 Bertha and her namesake niece, Bertha Bertillion at the 50th anniversary of Children's Hospital
photo courtesy of K. Bodding

The Bertha Wright Society is the group of donors with the second highest level of philanthropic giving at Children's Hospital, named in honor of its remarkably visionary founder. These generous donors are those who over their lifetime donated between $100,000 and $1 million to Children’s Hospital & Research Center Oakland.

Bertha Wright died May 6, 1971. The memorial service was held at the First Congregational Church in Palo Alto, and the surviving family requested that contributions be made to Children's Hospital. Bertha is buried with a simple headstone at the Alta Mesa Memorial Park in Palo Alto, California.