Beth Pierre Wilson (1909-1991) was the second African American school teacher hired by the Oakland Public School District in 1939, where she worked for over 20 years before her retirement.

Beth Pierre was born in Tacoma, Washington and graduated from the University of Puget Sound. Because of job discrimination, she moved to southern California where she enrolled at UCLA where she became a member of the Christian Scientist church. She married William Douglas Wilson (1907-1983) (marriage year unknown) who was born in Louisiana. The 1940 census data lists them as living at 1940 Acton Street #3, William's profession as "dental worker", and Beth's as "school teacher".  William Wilson became a dentist with offices at 8th and Adeline. He shared offices with his two brothers, Clay M. Wilson, M.D and Edward J. Wilson, an insurance agent. Beth may have been born in 1906 (suggested by SSI death record) or in 1909 (suggested by 1940 census). The 1936 voter registration lists them as living at 3109 California Street in Berkeley. William's profession is "dentist" and is registered as a Republican (later data shows Democrat); Beth's profession is "teacher" and is registered as a Democrat. They had two children, Diane Wilson Thomas and Deal Wilson. Their granddaughter is Ghanya Thomas.

There is an account that Beth Wilson was hired by the Oakland schools to teach Spanish in 1934, not 1939. 2

Ms. Wilson was good friends with Ida L. Jackson, the first African American teacher hired by the Oakland Public School in 1926.  Ida Jackson assisted Beth Wilson in getting hired, as well as provided housing for Ms. Wilson with she and her mother.

Additionally, she was a human relations consultant for both the Oakland and Berkeley public schools before she began her next career, that of a children's book author. 1'

In an interview with the Oakland Tribune [date? still checking] Beth Wilson said "Progress continues to be made in race relations.  I never anticipated that a black man in the 1980s would get this close to the presidency." [Colin Powell??]  "Now I'm sure we'll get a black president someday - maybe in my lifetime."  She's like to write about him. 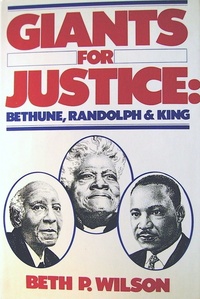 Beth was a Christian Scientist, and some of her writing was published in the Christian Science Monitor. She was a member of the Alpha Kappa Alpha Sorority (see Ida Louise Jackson), the NAACP, the Oakland Bay Area Links, the California Writer's Club, and the National Council of Negro Women.3